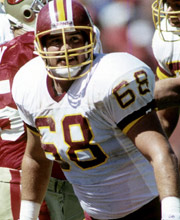 A standout offensive lineman who also served as the reserve punter at the University of Pittsburgh, Russ Grimm easily made the transition from college to the pros. The Washington Redskins selected him in the third round, 69th player overall, of the 1981 National Football League Draft. Originally pegged to play center, the position at which he excelled at Pitt, Grimm was moved to left guard where he earned a starting role as a rookie.

The 6'3", 273-pound Grimm became a steadying force on the Redskins vaunted offensive line of the 1980s that earned the nickname "The Hogs." By his second season in the NFL, Grimm gained much notice from around the league. Teaming with tackle Joe Jacoby, the pair formed what was perhaps the most punishing side of an offensive line in football at the time. With Grimm utilizing his speed and strength, the Redskins rode the success of a dominating running attack all the way to a victory in Super Bowl XVII. In that game, Hall of Fame fullback John Riggins gained a then-record 166 yards. Washington had averaged an astonishing 198 yards during that season's playoffs.

It was in his third pro year, in 1983, that Grimm began reaping the rewards of his efforts. He was selected to the first of four straight Pro Bowls. That season also marked the first of four consecutive years (1983-86) that he earned All-Pro recognition. Grimm was also named All-NFC in each of those seasons.

In 1987, Grimm was moved to center in training camp and started five games at the position before he suffered a torn ligament in his left knee that sidelined him until the season finale. The following year, Grimm again suffered cartilage damage to his left knee which forced him to miss 11 games. Although he remained a guiding force on the Redskins front line he continued to battle various injuries through the remainder of his career.

Grimm appeared in five NFC championship games during his 11-year, 140-game career. He also helped the Redskins to four Super Bowl appearances including wins in Super Bowls XVII, XXII, and XXVI. It was after the Redskins win over the Buffalo Bills in Super Bowl XXVI that Grimm announced his retirement.

One of the most feared guards of his era, Grimm was elected to the NFL's All-Decade Team of the 1980s.

1983 NFC - Washington Redskins 24, San Francisco 49ers 21
Grimm started the game at left guard. He had one fumble recovery during the game.

1987 NFC - Washington Redskins 17, Minnesota Vikings 10
Grimm did not start this game, but did play.

Super Bowl XXII - Washington Redskins 42, Denver Broncos 10
Grimm did not start this game, but did play at tackle.

Super Bowl XXVI - Washington Redskins 37, Buffalo Bills 24
Grimm did not start this game, but did play at guard. 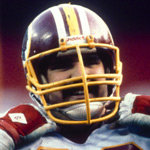 Drafted: 3rd round (69th player overall) in 1981 by Washington Redskins

Joe Bugel (presenter):
I’m Joe Bugel and Russ Grimm is an example for others. The first day he walked on the field with his shoulder pads on, we knew we had a winner. He is without a doubt the smartest football player I’ve ever been around. Nobody in the 32 years in the NFL I coached. Nobody made adjustments like Russ Grimm. He was our coach on the football field, that’s how much trust I had in him. He was a guy that could knock you on your back.  He led by example, preparation, practice, play.

I was so hard on that man right there, especially his first year.  When we went to training camp, I told the whole group it’s gonna be a lot of pain and torture, because we are gonna start four rookies.  NFC East – Randy White, Reggie White, Harry Carson, Lawrence Taylor.

We never accepted mediocrity; it was going to be physical, tough, nasty, smart, and violent.  That group was rare. That group made me a better football coach.  I loved them and worked them to death.

We had some guys who had great curved up bellies and I said ‘Ok you hogs.  Let’s get down in that bull pen and get started.’  And that name caught on and it gave that group a sense of identity. Without a doubt he was the head Hog, on the field, off the field. He just had that certain charisma that a leader has.

There’s one game that I’ll never ever forget. It was going to be Dallas or Washington going to the Super Bowl.  We had them up by maybe two touchdowns.  Coach Gibbs come up and he said Bugs what do you want to run. I said ‘50-Gut. Let’s run right at Randy, not away from him.’

So Randy was lined up against Grimm and it was one after another, plus 5, plus 6, plus 5.  We get in the huddle.  What’s the play? 50-Gut. We ran it 10 straight times. That’s when Randy White realized that Russ Grimm was not only a great football player but a Hall of Fame football player.”

Narrator (Steve Sabol):
Russ Grimm was chosen to the NFL’s All-Decade team for the 1980s. He anchored the offensive line for 11 seasons with the Washington Redskins and helped lead the team to four Super Bowl appearances and three world titles.

Bugel:
I can remember one big play. We ran over again Russ Grimm and Joe Jacobyour left side and Donnie Ward.  It was fourth down and one and Joe said ‘What do we have to do?’ Our offensive staff said ’70-Chip, we’re gonna live with that.

When you see Russ Grimm come on the football field you say hey that’s a real NFL All-Pro and that’s a real NFL Hall of Famer. He was legit, nothing phony about the guy. He could play with pain and injury. I love and respect the young man and I will go to my grave saying that. It’s like I had a son and my son was inducted into the Hall of Fame. He would do anything I asked him to do and I would do anything he’d ask me to do. We are very, very close. I am so proud of him.

I am honored to pre 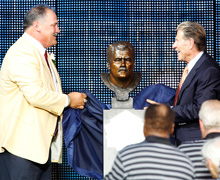 sent Russ Grimm for induction into the Pro Football Hall of Fame.

Russ Grimm:
Thank you.  Of all the guys I probably could have picked, I knew picking Joe would start me out being a little bit emotional, but with the humidity and some of the pollen, if I start to tear up a little bit, that's the reason why (smiling).

I want to say thanks to Karen and my kids, Chad, Cody, Devin, Dylan, for all the sacrifices they made.  Proud of you.

I'd like to thank my brothers Dave and Donn, my sister Carol Sue for their interest they've showed throughout my career.  I'd like to thank you Stacey for putting up with me, putting this weekend together.  It's been special.

I'm proud to say that I'm from a small town in Western PA.  That's right.  It's a special part of the country, like here, where the knowledge and the support for the game of football is unmatched.  They fill the stadiums on Friday night, Saturday afternoons and Sundays.  You created an excitement that growing up as a young man I wanted to be a part of.  Thank you very much.

Scottdale, PA, I will always call you home.  Thank you for all your support.

Southmoreland High School, my coach John Bacha, the administration, the teachers, thank you for creating a strong, healthy, positive environment for myself and the students of Westmoreland County.

The class of '77, we graduated singing Free Bird.  If I leave here tomorrow, would you still remember me?  Not only did you remember me, you took a special interest, you stayed in touch, you supported and followed my career.  For that, I will always remember you.  Thank you.

University of Pittsburgh, I played quarterback and linebacker in high school, I went to the University of Pitt as a linebacker.  After my sophomore year, Jackie Sherrill called me into his office and told me that we had a lot of seniors graduating on the offensive line and he thought it would be an opportunity for me to switch over and play center.

I told him I never had my hand in the dirt, that I'd just stay at linebacker.

He lifted his eyes up and looked at me and he said, son, I'm not asking.

So I moved over.  I wasn't very happy about it.  But I had a great offensive line coach named Joe Moore.  He knew I wasn't happy.  I didn't like the transition.  But he called me in one day, sat me down, talked about it, told me that I was a football player and I should play whatever position that they thought I was best capable of playing.  He told me that playing offensive line, there's no greater feeling than to be able to move a man from Point A to Point B against his will.  I tried it; I liked it; and I was playing offensive line (smiling).

I got drafted by the Redskins in '81.  I'm a true believer that if you work hard and you have the talent necessary, good things are going to happen.  But I'm also smart enough to realize you have to be a little bit lucky and get the right opportunity.

I was selected to a team that had a new head coach in Joe Gibbs, a staff that included Joe Bugel, and a lot of talented players selected by Bobby Beathard.  We struggled early, started winning some games.  We finished 8-8 the first year.  The next year was the first of three Super Bowl wins.  In my 11-year career, we won a lot of football games.

Joe Gibbs, thank you very much.  Joe Bugel, you're special.  You always will be.  Bobby Beathard, thank you.

Next I want to mention a few guys that made it possible for me to be here today, a group of guys that grew together, worked together, played together, raised families together, celebrated together, guys that I consider family, a group known as the Hogs.  Joe Jacoby, Jeff Bostic, Mark May, Fred Dean, Donnie Warren, George Starke and Rick Walker.  Your names are going to be embroidered on the inside of this jacket so I always remember the things we went through, the tough times we had and the good times we celebrated.

Mark Schlereth, Raleigh McKenzie, Jim Lachey, Jim Hanifan, all the guys I played with up front, thank you very much and thank you for the memories.

Last but not least, to burgundy and gold fans, there's many a time when I closed my eyes and I picture myself still putting on those pads at old RFK Stadium, and those stands are rocking up and down and 50 some thousand chanting, We want Dallas.  I can hear the diesel horns blowing when 44 was carrying the football, and I remember standing there in the pouring rain when everyone was throwing the seat cushions down on the field in the playoff game versus Atlanta.

You provided a lot of memories for me and my teammates.  You made playing for the Redskins special.  You created an atmosphere on game day that was second to none.  The support you showed, the enthusiasm you had, the love you displayed for those teams will always be remembered.  Thank you very much.

To all football fans, no matter who you root for, no matter what level, you're the reason we play the game.  Thank you very much.