Hall of Famers Published on : 1/1/2005
The thing Kellen Winslow recalls most about the game many consider the greatest in NFL history is the crowd.


"I remember how quiet it was in the Orange Bowl when we went ahead 24-0," the Chargers' Pro Football Hall of Fame tight end said recently. "And then I remember how loud it got when the Dolphins came back and scored on that hook-and-ladder play just before the half.

"It was so noisy at halftime, under those rickety stands, we couldn't hear our coaches in the locker room."

It was a day filled with as much frenzy as flying footballs. Just when one team appeared to have this 1981 AFC Divisional Playoff Game under control, the other came roaring back on an afternoon when the quarterbacks were hotter than the sweltering 85-degree temperatures. 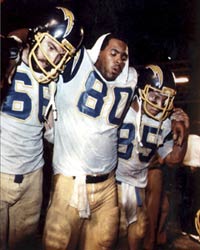 The Chargers had Dan Fouts throwing to Winslow and Charlie Joiner, a future Canton triumvirate that was the heart of a Don Coryell offense so deep and gifted, it ranked among the most explosive in league history.

The problem, of course, was the San Diego defense, which had holes big enough to house all of Don Shula's glittering trophies. So even when the Chargers raced off to that 24-0 first-period lead, they had to know it wasn't safe.

When Shula replaced struggling quarterback David Woodley with old, reliable Don Strock a few minutes later, momentum swung like some huge pendulum. Strock drove the Dolphins to 10 quick points, then, with time running out in the half, Shula reached back to an old playground somewhere for a gimmick play that couldn't have worked any better.

It's called the hook-and-ladder, and Duriel Harris' 15-yard reception and ensuing lateral to trailing Tony Nathan produced a 40-yard touchdown that closed the gap to 24-17 and set the stage for a theatrical second half.

If the game took on the appearance of some Shakespearean drama, then Winslow was its Olivier.

Shula later called him "Superman," and who could argue? Cape or no cape, all Winslow did was catch 13 passes for 166 yards, then rise eerily out of the crowd to block Uwe von Schamann's 43-yard attempt at a game-winning field goal with the teams tied at 38 in the final seconds of regulation.

"I told 'Big Hands' [Gary Johnson] and Louie [Kelcher] to give me some penetration, and I'll get it," Winslow said. "They did, and I think I got one finger on it."

By then, the heat, humidity, and emotion had drained everyone, and the thought of playing an overtime period was almost too much to comprehend.

"I remember Kim Bokamper fighting through Don Macek and Ed White to get to Fouts, only I was there to block," Winslow said. "After the play, Kim looked up from the ground and said, 'Damn, Kellen. What are you doing back here?' We were both so tired, we just started to laugh."

The Dolphins weren't laughing a few minutes later, in overtime, when von Schamann had another field-goal attempt-this time a 34-yarder-blocked by defensive end Leroy Jones. And the disbelieving crowd of 73,735 began to wonder if this surreal game would ever end.

It finally did after Fouts found Joiner for 39 yards down the middle to set up Rolf Benirschke, who eight minutes earlier had missed a 27-yard field goal, for a 29-yard attempt. The kick seemed to hang in the air forever before sailing through the uprights for a 41-38 victory.

"It was like all the adrenalin rushed out of me and all the fatigue and soreness rushed in," said Winslow, who needed two teammates to help transport his cramped 240 pounds to the locker room.

Later, as a lone reporter stood by his cubicle, Winslow's large, tired body was draped over a long bench. He looked up, tried to smile, and then uttered the perfect tag line to this unforgettable game.