In 2000, Heidi Cadwell contacted the Pro Football Hall of Fame about donating her grandfather's NFL contract from 1927. Her call was of great interest to the Hall because its files indicated that Jesse Rodriguez, a fullback-punter, with the 1929 Buffalo Bisons was the first Hispanic player in NFL history. Further research by the Hall of Fame and Hispanic historian Mario Longoria confirmed that, in fact, IGNACIO "LOU" MOLINET played in the NFL in 1927.

Molinet, a native of Chaparra, Cuba, played nine games for the Frankford Yellowjackets that season. Molinet had starred in basketball and football at Cornell University where he earned four varsity letters and received a degree in Mechanical Engineering. 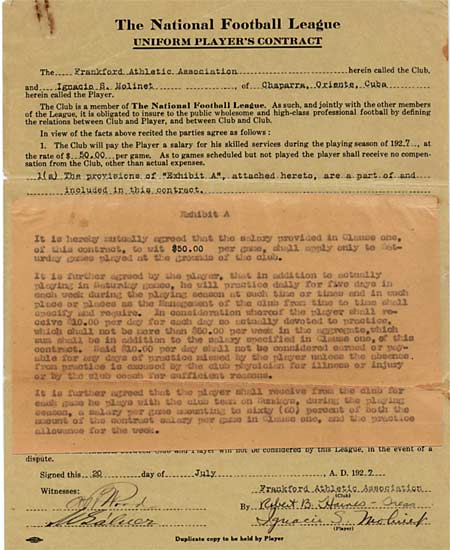 Here is the complete description of the Hall's selection process.