“You’re Oakland Raiders, wherever you go, whatever you do,” Al Davis told his team. “Anybody who is ashamed of that can get on a plane and leave right now. You’re here to win, win, win!!”

That philosophy set the tone for the “Just Win, Baby,” and “Pride and Poise” slogans the Raiders have made famous over the years. 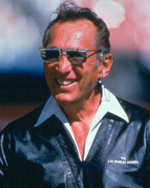 For his player talent, Davis used every conceivable avenue – the college draft, trades, and the careful culling of players made available by other teams. He specialized in taking other teams’ castoffs and turning them into all-pros. Davis refused to join a scouting combine and instead relied on the Raiders organization and his own instincts to develop a winner.

Once Davis got the players he wanted, he did everything he could to make them happy. Raiders players were traditionally the best paid in the league. He chartered bigger jets for their comfort and insisted that pre-game meals were catered to individual tastes. He still invites former Raiders to home games each season and arranges for former teammates to be on hand whenever a Raider is inducted into the Pro Football Hall of Fame.

While most knowledgeable football men respect Davis for his thorough knowledge of the game, many have complained of this alleged skullduggery over the years.

There is one story about the time Davis ran into Dallas Cowboys scout Gil Brandt in a hotel men’s room during the AFL-NFL war of the 1960s. Both were trying to sign the same player. After a few pleasantries, he left Brandt, dashed to a phone, dialed the front desk to identify himself as Brandt and then ordered all calls to that room be held until the next morning. 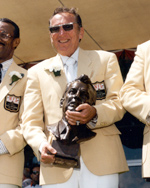 There are other tales, perhaps some that may be more folklore than fact, about the methods Davis used to help his team win. He has been accused of having the grass watered in the Oakland Coliseum to slow down faster enemy runners and having Raiders players rub Vaseline on their jerseys to make it more difficult for tacklers to get a grip on them.

Many also suspected that Davis had an active army of spies. The opposition often became so paranoid about that possibility that, whenever a helicopter flew over a practice field, rival coaches imagined it was a Davis operative looking things over. Once, San Diego coach Harland Svare was so convinced that Davis had bugged the Chargers locker room in the Oakland Coliseum, he snarled at a light bulb and shouted: “Damn you, Al Davis, I know you are listening.” When he heard the story, the amused Davis retorted: “The bug wasn’t in the light bulb.”

It was Davis’ zealous, win-at-any-cost approach that prompted AFL officials to tap Davis as their commissioner in April, 1966. As Gillman said, “Davis will be the perfect choice for commissioner. He’ll sit up all night scheming and conniving.”

Many AFL owners may have had merger with the rival NFL on their minds, but Davis took the post with every intention of demolishing the NFL in an all-out struggle. He immediately began an intensive campaign to lure at least 16 of the NFL’s top players, including eight starting quarterbacks, into the AFL fold as soon as their contracts ran out. But both sides sensed impending financial disaster and decided on a peaceful settlement, which was announced on June 6, 1966. Although preliminary talks between the two sides had begun several months earlier, Davis’ program of raiding the NFL rosters provided the final incentive for a quick merger.

In the expanded NFL, Davis served on the prestigious competition committee for several years. But his already-tenuous relationship with other owners, many of whom still resented his tactics in the pre-merger years, quickly dissolved when he began contesting fellow owners in court.

But a different breed of owners -- people who had made their money in non-football pursuits -- came into the NFL in the late 1980s. When issues came up between the “old school” and the “new breed,” both sides began looking to Davis for his ideas.

When Davis was questioned once about his “rebel” image, he responded: “I would rather you use the word ‘maverick’ instead of ‘rebel’. I consider myself to be part of the establishment.

The Pro Football Hall of Fame will soon unveil yet another new look. On August 8, the museum will hold an official ribbon-cutting ceremony to formally open the new Lamar Hunt Super Bowl Gallery.