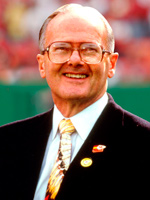 The gallery is named in honor of the man whose vision and love of sports not only gave birth to a new league, but an international sports phenomenon he literally named. Hunt, who was enshrined into the Pro Football Hall of Fame in 1972, was the guiding figure behind the formation of both the American Football League and the Dallas Texans franchise, which later became the Kansas City Chiefs. He is also credited with naming the Super Bowl. The Lamar Hunt Super Bowl Gallery will be dedicated to a single subject, the Super Bowl.

“This is a tremendous honor for our family and a meaningful tribute to my father’s contributions to the NFL’s showcase event,” Kansas City Chiefs Chairman Clark Hunt said. “From naming the game and assigning its Roman numerals, to suggesting the name of the Lombardi Trophy, the development of the Super Bowl is a substantial piece of my father’s professional legacy, and we are very proud that this beautiful gallery will bear his name.”

Within the Lamar Hunt Super Bowl Gallery dynamic displays and exciting interactive video kiosks highlighting every Super Bowl, the great plays and the game’s stars, will complement the one-of-a-kind game artifacts that will permeate throughout the 4,000-square-foot space. Stories like how the merger of the AFL and NFL resulted in the creation of sport’s ultimate championship game; the significance of the first four Super Bowls; and how the game has risen to unsurpassed levels of popularity worldwide will be presented.

In a state-of-the-art Super Bowl Theater, visitors will experience the sense of awe and excitement that is the Super Bowl as the full force of the most recent game is presented through the cinematic magic of NFL Films.

This $2.4 million renovation and modernization project, coupled with major renovations completed in 2008 and 2003 provides the museum with a dramatic new look to more than two thirds of the Hall of Fame’s exhibition space.  The Lamar Hunt Super Bowl Gallery further cements the Pro Football Hall of Fame’s status as “America’s premier sports museum and showplace.”

Class of 1996 enshrinee Lou Creekmur died July 5 at the age of 82. A stalwart for the Detroit Lions dominant teams of the 1950s, he earned All-NFL acclaim twice as a guard and four times at tackle.