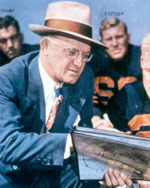 Hall of Fame legend George Halas was involved with the National Football League from its inception in 1920 through his death in 1983. He played, coached and was the owner of the Chicago Bears. His coaching tenure spanned 40 seasons. During that time, he learned many tricks of the trade.

One such lesson he learned was an interesting method to how he released players each summer. One of his former players, Hall of Famer Stan Jones remembered how Halas handled the unpleasant task of letting players go.

“He’d do it right after you did the wind sprints,” shared Jones who was enshrined into the Hall of Fame in 1991. “A guy would be huffing and puffing out of breath, practically down on all fours, and Halas would come up, put his arm around the guy and say, ‘Kid, I hate to do this, but I’m going to have to let you go.’

“And the guy can’t say anything because he’s breathing so hard!” Jones said. “It seemed like a great way to do it.”

Coach wants to see you. And, bring your playbook!

The Turk is coming. Roster cut down day is always a tough time for all involved. The man called “The Turk” is the most feared individual around the NFL at the end of preseason.

You've got the wrong man!