Great players defined by Great Games
A big-time performance in a playoff game is just one unit of measure that helps a player earn a bronze bust in Canton. Our coverage of the 2009 NFL Playoffs includes weekly flashbacks to spectacular games recorded by members of the Pro Football Hall of Fame. 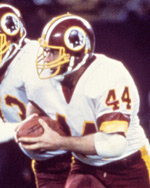 The Washington Redskins finished first in the NFC with an 8-1 mark during the strike-shortened 1982 regular season. The Redskins then relied heavily on its offensive line nicknamed “The Hogs” and its bruising running back and future Hall of Famer John Riggins to fuel the attack in the postseason.

Washington rolled past the Detroit Lions and Minnesota Vikings to advance to the NFC championship game against its bitter rival, the Dallas Cowboys. The Redskins entered that contest looking for revenge as its lone regular loss that year came against Dallas in early December.

For Riggins, 33, the game marked the first championship game appearance of his 11-year NFL career. The Cowboys were all that stood between him and his first Super Bowl.

The formula for this emotionally charged game was simple for Washington. Hand the ball off to John Riggins. It’s something the team did 36 times that day. He rumbled for 140 yards and scored a pair of touchdowns as Washington advanced to the Super Bowl with a 31-17 win over Dallas.

Riggins’ rushing attempts were the most ever by a running back in conference championship history. While he matched the mark one year later in Washington’s win over the San Francisco 49ers, the record number of carries remains today.

Going to the Super Bowl!

A couple from outside Philadelphia have won a trip to Super Bowl XLIV!