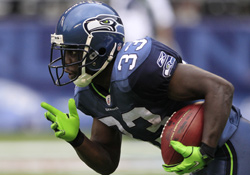 Leon Washington of the Seattle Seahawks on Sunday became the 10th player in National Football League history to return two kickoffs for touchdowns in the same game. He accomplished the rare feat in the Seahawks' 27-20 win over the San Diego Chargers during the Week 3 matchup.

Washington's first return came on the opening kickoff of the second half as he returned the football 101 yards for the score. With the extra point that followed, the Seahawks led 17-0 at the time.

His next return for a touchdown came midway through the fourth quarter and proved to be the game-winner. After the Chargers Antonio Gates tied the game at 20-20 on a 12-yard touchdown pass from Philip Rivers, Washington retrieved the ensuing kickoff and raced 99 yards to the end zone.

The Philadelphia Eagles Timmy Brown in 1966 was the first player ever to have a pair of kickoff returns for touchdowns in the same game. The feat occurred twice during last season.

Hall of Famer George Blanda, at age 43, strung together a run for the ages. He helped the Raiders to spectacular comebacks in five straight weeks during the 1970 NFL Season.

Anquan Boldin reached the 600-catch mark faster than any player in NFL history. He reached the plateau in Week 3 of the 2010 NFL season.