Enshrinement Published on : 7/19/2011
Class of 2011 enshrinee Deion Sanders played for five different teams during his 14 seasons in the National Football League. He began his pro football career with the Atlanta Falcons, the team who drafted him as the fifth overall selection in the 1989 NFL Draft. After five years in Atlanta, he signed as a free agent with the San Francisco 49ers. He ended his Hall of Fame career by playing one season with the Washington Redskins in 2000, and after a three-year retirement, two finals seasons in 2004-05 with the Baltimore Ravens.

In the middle of his career he starred for five seasons from 1995-99 in "Big D" after signing with the Dallas Cowboys. His electrifying play, and a personality to match it, fit perfectly with a Dallas team that was dominating the NFL.

He enjoyed some of his best years with Dallas. He had 14 of his career interceptions while wearing a Cowboys jersey. "Prime Time" as he was nicknamed earned All-NFL honors each season during his stay in North Texas. Sanders also enjoyed the most success at returning punts while playing for Dallas.

Although he often displayed a knack for huge plays throughout his career, there is one particular game that came during Week 3 of the 1998 season that may rank among the finest of his career. In a Monday Night Football showdown against the division rival New York Giants the Cowboys were without the services of starting quarterback Troy Aikman who was out with a separated shoulder. To make matters worse, running back Emmitt Smith carried just seven times before leaving the game with an injured groin. 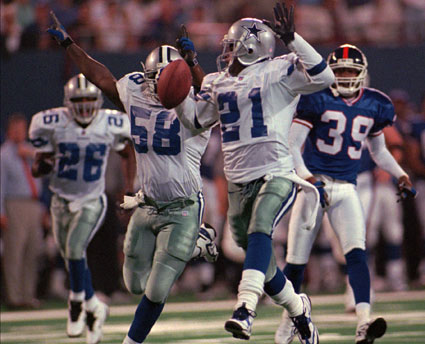 As it turned out, it didn't matter. That's because Sanders electrified a national television audience with a spectacular performance that helped the Cowboys rout the Giants, 31-7. He recorded a NFL rarity when he became the first player since 1966 to return a punt and an interception for a touchdown in the same game. Only three players before him and none since had ever accomplished such a feat. The game marked the only time in his career that he had multiple touchdowns.

After a scoreless first quarter, it was Sanders who recorded "bookmark" touchdowns in the Cowboys' blowout. He opened the game's scoring early in the second quarter when he had a dazzling punt return that he took 59 yards to pay dirt and give the Cowboys a 7-0 lead.

"I don't catch the punt and go 10 yards. I try to score every time," he shared after the game.

Then, with less than three minutes remaining in the contest, he turned out the lights on the Giants as he stepped in front of a Danny Kanell, pass and raced 71 yards for the game's final tally. In addition to the pick-six, he had five punt returns for 100 yards, and also added one catch for 55 yards. His lone reception set up the Cowboys' third touchdown of the night. Not bad for a player who was sidelined with dehydration earlier the game. He finished with an impressive 226 all-purpose yards and registered four tackles.

A stunned and disappointed Michael Strahan of the Giants could only offer this observation from the loser's locker room. "We all know how dangerous the guy is, so we shouldn't have been surprised by what he did. But we were. It makes no sense."

Strahan wasn't the only one perplexed. League officials had to decide just how to honor Sanders' incredible evening on the football field. The NFL had weekly awards that were granted to players who recorded great individual performances on offense, defense, and special teams. Realizing just how special of a night Sanders had, the NFL for the first time honored a player in his very own category. The NFL announced that Sanders had been named the NFC's "Prime-Time" Player of the Week for his play at cornerback, wide receiver, and punt returner.

Sanders was named to the NFL's All-Decade Team of the 1990s at both cornerback and punt returner based much on what he did in Dallas. Aside from his interception total in Dallas, he also amassed more than 50 percent of his punt return yardage during a three-year span with the Cowboys from 1996-98. He ran back 87 punts for 1,126 and had four of his six career touchdowns on punt returns during those seasons.

Seven legends of the game were elected to the Hall of Fame on Saturday, Feb. 5, 2011. They were formally enshrined on Saturday, Aug. 6.