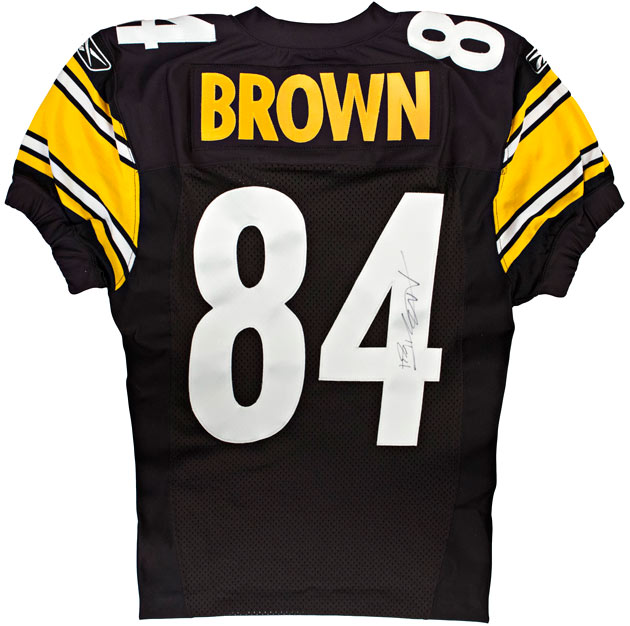 Antonio Brown, the Pittsburgh Steelers wide receiver entering his third NFL season, recently made a trip to the Pro Football Hall of Fame to tour the museum with the club’s drafted and free agent rookies. After admiring the Hall’s many exhibits, he offered to send one of his Steelers jerseys to the Hall of Fame. The memento has arrived in Canton.

Brown made history during the 2011 NFL season when he became the first player in the National Football League to compile both 1,000 yards receiving and 1,000 total return yards in the same season.  The jersey is being displayed in the Pro Football Today Gallery as acknowledgement of the historic milestone.

The record was set on Jan. 1, 2012 in a Week 17 matchup against the Cleveland Browns. Brown entered the game having already reached the 1,000-yard receiving mark and needed only 11 total return yards to add his name to the NFL record book. The historic moment took place with just over six minutes remaining in the first half. Brown received Cleveland’s kickoff five yards deep in his own end zone and returned the ball to the Steelers 18-yard line. His 23-yard return brought his return yardage total past the 1,000-yard plateau to add to his already impressive array of statistics compiled during the 2011 NFL season.

Brown posted career-high totals in receptions (69), receiving yards (1,108), kickoff return yards (737), and punt return yards (325) on his way to being named the Steelers’ Most Valuable Player by his teammates. Antonio’s 2,211 all-purpose yards set a Steelers’ franchise record, surpassing the 2,034 yards running back Barry Foster amassed in 1992.

The late Tom Kowalski will be honored during the 2012 Enshrinement Festival with the prestigious Dick McCann Award.