Playing on the interior of the defensive line didn’t stop Class of 2012 enshrinee Cortez Kennedy from racking up impressive stats during his career with the Seattle Seahawks.

Kennedy, who wore No. 96 for most of his career, donned No. 99 for one year as a tribute to his best friend Jerome Brown. The Philadelphia Eagles defensive tackle, who played alongside Kennedy at the University of Miami, died in an automobile accident prior to the ‘92 season. Cortez honored his friend in fine fashion wearing Brown’s number as he recorded arguably the finest season of his career. Despite Seattle finishing with a 2-14 record, he registered a career-high 14 sacks and 92 tackles en route to being named the NFL’s Defensive Player of the Year.

Cortez didn’t record his first career interception until his 10th season but then racked up three picks in his final two years. His first INT came in Week 6 of the ’99 season when he snagged an errant pass thrown by San Diego Chargers quarterback Erik Kramer. Three weeks later he intercepted Jeff Blake of the Cincinnati Bengals. His final heist came late in the 2000 season when he picked off Atlanta Falcons quarterback Doug Johnson.

Kennedy’s lone touchdown of his career came in 1998 in a Week 14 battle against the San Diego Chargers. He led the Seahawks’ defense that limited San Diego to just three points in the second half and just 66 total rushing yards as Seattle won 38-17. Cortez’s touchdown came when he recovered a Ryan Leaf fumble in the fourth quarter and ran it back 39 yards for the score. 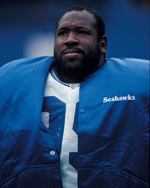 “I’m very passionate about Cortez and feel that he is extremely deserving to be in the Pro Football Hall of Fame. He possessed the combination of size, speed and quickness that you are looking for from the defensive tackle position, as well as the character and leadership abilities that you look for from any player.” - New Orleans Saints EVP/General Manager Mickey Loomis (Seahawks VP and EVP from 1990-98 during Kennedy's tenure)

“I played with Cortez Kennedy for a couple of years in Seattle, and the way he dominated the game at the nose tackle spot … having 14 sacks in a season from that position, also has three interceptions in his career, believe it or not. The guy is just an all-around great football player. So he’s a guy I think is very deserving.” - Hall of Fame quarterback Warren Moon

“Cortez Kennedy was the most dominant interior lineman that we ever faced and certainly the very best against the run.” - Former Oakland Raiders guard Steve Wisniewski

NFL/Hall of Fame Game tickets are now on sale!

The Dallas Cowboys and the Miami Dolphins will play in the first preseason game of the year.