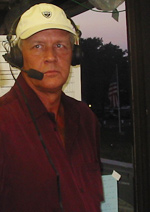 Trumpy began his long national broadcasting career in 1978, almost immediately after a 10-year, Pro Bowl career with the Cincinnati Bengals, as an NFL color analyst for NBC Sports.

He served in that role until 1997. For three seasons, 1992-94, he was paired with Dick Enberg as the network’s top announcing crew during which time he called Super Bowls XXVII and XXVIII.

“In addition to being a former player and having a great set of pipes, what made Bob great was that he was never afraid to give his opinion,” said Jon Miller, President, Programming, NBC Sports & NBCSN, who worked with Trumpy in the 1980s and 1990s. “He did his homework and had a great passion for the sport. Bob’s one of the few guys who could talk about the game as well as he played it. This honor is well deserved.”

He worked with Don Criqui on NBC Radio calling Monday Night Football in 1985 and 1986 and called Super Bowls XX and XXI. In 1999, Trumpy joined Westwood One Radio Sports as the Sunday Night Football analyst and served in that role through his retirement after the 2007 season.

“We are thrilled, and congratulate Bob for being selected as this year’s Rozelle Award winner,” stated Howard Deneroff, EVP/Executive Producer for Westwood One Sports. “Now others will recognize what we have known for years – he is a Hall of Famer, both as a broadcaster, and a person. After enjoying watching him on TV for years, it was an honor to have him finish his career as our Sunday Night Football radio analyst for nearly a decade.”

In addition, he has called numerous college Bowl games, four Pro Bowls, six Hall of Fame Games, and been a part of 10 Super Bowl pre-game shows.

Trumpy began his pro football career as a member of the expansion Bengals in 1968 and became one of the game’s elite tight ends. He played his entire career with Cincinnati. The four-time Pro Bowl player was equally adept at blocking and catching the ball and retired as the club’s all-time career receiving leader with 298 receptions for 4,600 yards and 35 touchdowns.

Hall of Famers by State

Pennsylvania leads the way with 30 members of the Pro Football Hall of Fame born in the "Keystone" state.

A Seattle Seahawks Super Bowl XLVIII ring arrived this week at the Hall of Fame.