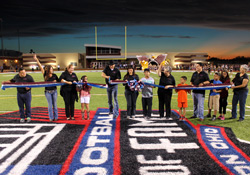 The high school stadium that bears the name of legendary Pro Football Hall of Fame coach Tom Landry will reveal a new look when it hosts the first official game of the 2014 Texas high school season on Friday, Aug. 29, 2014.

Tom Landry Stadium in Mission, Texas has long been regarded as one of the top high school football stadiums in “The Lone Star State.” The venue which has carried Landry’s name since 1983, has ranked among the top ten grass fields in the state for high school stadiums.

Earlier this year, a decision was made to replace the grass surface with artificial turf as well as complete other renovations to the venue. During the process, school officials reached out to seek permission from the Pro Football Hall of Fame to incorporate the Hall’s logo at midfield of Tom Landry Stadium. The idea was hatched after school officials witnessed the community response to a tribute to Landry last October. The school was the center of attention as part of the Hall’s Hometown Hall of Famer™ program. A commemorative plaque was permanently placed at the school to acknowledge the community’s role in helping Landry achieve greatness. 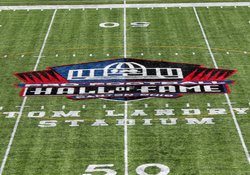 “We not only wanted to provide our athletes with the best turf field,” said Ricardo López, the Mission Consolidated Independent School District superintendent. “It was also important to our Board of Trustees that Tom Landry Stadium be a place that our student athletes would be proud to call home. Tom Landry Stadium is now the only high school football field in the country outside of Canton, Ohio (home of the Pro Football Hall of Fame) to have permission to use the official Hall of Fame logo as a part of its playing field. This field symbolizes the past, present, and future legendary achievements of our students. This unique field is the envy of football programs across Texas and our students deserve this distinction.”

“Tom Landry and the Pro Football Hall of Fame are synonymous with excellence and the values they represent are a foundation that can inspire every student and all athletes to greatness, on and off the field,” Hall of Fame President David Baker commented.

Landry spent six seasons as a defensive back and punter in the All-America Football Conference and the National Football League from 1949 to 1955 before embarking on his coaching career. He became the head coach of the expansion Dallas Cowboys in 1960 and spent the next 29 seasons at the helm. Noted for perfecting the flex defense and creating multiple offensive schemes including the revival of the shotgun formation, Landry led the Cowboys to 20 straight winning seasons that included a pair of Super Bowl titles. He compiled a 270-178-6 overall record and his win total still stands as the third most in NFL history. Landry was enshrined into the Pro Football Hall of Fame in 1990.

The Arena Football League announced that Tampa Bay Storm President Derrick Brooks was named the 2014 Executive of the Year.