New Orleans Saints owner Tom Benson has pledged two significant gifts totaling $11 million to the Pro Football Hall of Fame. The contribution is the largest gift by any individual in the Hall’s 51-year history.

“Tom Benson’s leadership has been instrumental in the NFL’s success and growth for nearly 30 years as owner of the Saints, including more than 20 years as chairman of the league’s Finance Committee,” said NFL Commissioner Roger Goodell. “His generous gift to the Hall of Fame will forever link Tom's legacy to the game he loves and to the legends who helped build it.”

Benson was the first NFL owner to buy an Arena Football League team when the Hall of Fame’s President, David Baker, served as the AFL’s Commissioner. Baker approached Benson about a $10 million proposal for the Hall of Fame Village Master Plan which was approved October 30, 2014 by the Hall of Fame’s Board of Trustees. The Saints’ longtime owner responded positively within days to Baker’s inquiry and then surprised the Hall of Fame President by adding that he would also donate an additional $1 million to the Hall of Fame’s Legends Landing Program, a mixed-use residence that includes room for Hall of Famers and former NFL players. The Master Plan for Hall of Fame Village also includes a Sports & Entertainment Complex, a high-end hotel and conference center, a Center of Athletic Performance & Safety, a Youth Football Center and playing fields, an Institute for Integrity & Officiating, a Coaches University, an Academy of Corporate Excellence along with thematic restaurants, retail and attractions for an NFL fan like a Family Football Experience.

“Tom Benson’s legacy to this game is indelible,” Baker shared. “His deep passion and unwavering promotion of the game’s values are perfectly aligned with the Hall of Fame and its mission. His generous gift will help honor the Heroes and Legends of the Game, preserve its history forever, promote its positive values to generations of young fans and families that will shape our future, and to celebrate excellence”

Benson had the following remarks concerning the record gift to the Hall of Fame:

“The Pro Football Hall of Fame is located at the birthplace of the National Football League, and its mission is to Honor the Heroes of the Game, Preserve its History, Promote its Values, & Celebrate Excellence EVERYWHERE. That alone was enough for me to get involved. However, what I found to be most impressive was the recent announcement by the Pro Football Hall of Fame regarding the plans for the Hall of Fame Village. It encompasses everything our league stands for and it will do it in one place - Canton, Ohio - the home to the Hall and the birthplace of our great game.

“I think it is important that we, as owners, as teams, as administrators, players and coaches all recognize the origins of our game and embrace the future, I believe the Hall of Fame Village will be the preeminent focal point of that. When I bought the Saints in 1985, I would have never dreamed how much the game of football would have impacted my life personally, but more importantly, it has impacted the city of New Orleans, our fans, and generations of people and has served as a beacon of hope during tough times. I cherish the role our team plays in our community. It is an honor for me to have my name associated with the Pro Football Hall of Fame and it is an honor to play a small role in the advancement of this project. 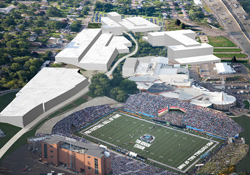 “I am especially proud of what the Hall of Fame is doing with the creation of the Legends Landing…this is one where we can make a tangible difference in the lives of our game’s greats. It is important that we all play a role here.”

The gift includes naming rights for the stadium adjacent to the Hall of Fame in Canton, Ohio, which will be renamed “Tom Benson Hall of Fame Stadium.” The $10 million gift is earmarked for the immediate renovation of what has been known as Fawcett Stadium. The venue hosts the Hall of Fame’s annual Enshrinement Ceremony and the NFL/Hall of Fame Game that kicks off each NFL season. The stadium is also home to two high school football programs (McKinley High School Bulldogs and Timken High School Trojans) and two NCAA Division II football teams (Walsh University Cavaliers and Malone University Pioneers). The renovation is scheduled to begin following next summer’s Enshrinement Ceremony and Game, and, once completed, will allow the Tom Benson Hall of Fame Stadium to host other sports and entertainment events.

As part of the approval, the Board of Trustees for the Hall of Fame and the Canton City School District jointly agreed to also commemorate the memory of John A. Fawcett, for whom the stadium was originally named (1938), in special exhibits that will also preserve that history forever in both the stadium and at the Pro Football Hall of Fame.

"Mr. Fawcett was a respected civic and community leader, school board member and outstanding athlete,” Adrian Allison, Superintendent for the Canton City School District said. “After sharing the news of Mr. Benson's gift with Mr. Fawcett's family, I believe that he would be proud that the students of Canton will have the opportunity to compete in what will be one of the finest facilities in the country. He would have appreciated the importance of this project for the city."

Sports Illustrated, Monday Morning Quarterback: A new idea, and a good one, for the Hall of Fame

A thank you to #TomBenson From us at @ProFootballHOF your donation was a huge http://t.co/dzQyTswosg

Thank you @Saints owner Tom Benson for $11 million donation to #ProFootballHOF. Venue next door will now be Tom Benson Hall of Fame Stadium.

Benson's donations will go towards the renovation of Fawcett Stadium & the Hall of Fame’s Legends Landing Program http://t.co/EvBQCIql9r

Saints owner Tom Benson is pledging $11 million to Pro Football Hall of Fame, the largest contribution by any individual.

Tom Benson has owned the New Orleans Saints for nearly 30 years and has been integral during that time in promoting the values of the Game.

The Pro Football Hall of Fame’s Ring of Excellence will be presented to three legends from the 49ers – Hugh McElhenny, Bob St. Clair, and Y.A. Tittle during a special presentation.