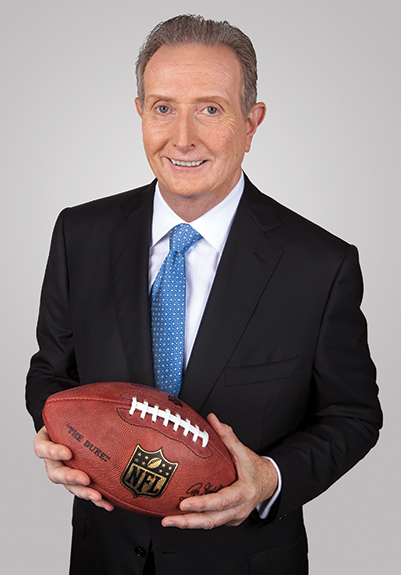 The Pro Football Hall of Fame’s Ralph Hay Pioneer Award, formerly known as the Dan Reeves Pioneer Award, is presented periodically to an individual who has made significant and innovative contributions to professional football.

NFL Commissioner Roger Goodell commented, “Joe Browne did a remarkable job representing the NFL during his extraordinary 50-year career with the league office. I was fortunate to break in as an NFL intern under Joe. It was a terrific education. Joe was always a fierce protector of the shield, a demanding innovator, and he set the standard for effective sports PR. He was a mentor. He is a friend, and he is most deserving of the Ralph Hay Pioneer Award that will preserve his place in NFL history.”

“Joe Browne’s professionalism, trust, and passion for the National Football League over a half century was critical to shaping the game’s image and promoting its great growth,” Hall of Fame President David Baker stated. “The NFL has never had a more committed and dedicated employee than Joe and his immense impact on the league is immeasurable. He is the very definition of the Ralph Hay Pioneer Award.”

Browne retired from the NFL at the end of March as the longest serving employee in the league office. He began his career at the NFL as a 17-year-old college intern in 1965. After serving on active duty in the United States Marine Corps Reserve, Browne joined the NFL as a full-time employee and served under then-Commissioner Pete Rozelle in a number of key roles for two decades.

In 1990, Browne was named the league’s first-ever Vice President by then Commissioner Paul Tagliabue. He was promoted five years later to Senior Vice President and, in 2002 to the NFL’s Executive Vice President of Communications & Government Affairs.

Browne led the NFL’s efforts to generate international publicity and media coverage for the annual Super Bowl. The game annually attracts more than 5,000 members of an international media corps and is televised to 170 countries and territories in nearly 25 languages. Browne has worked the last 49 Super Bowls.

In 2010, Browne became the Senior Advisor to Commissioner Goodell. He spent the final five years of his illustrious tenure at the NFL primarily working with – and promoting –  the 20,000-plus retired players.

He and his wife Karyn have two sons – Tim & Randy; daughter-in-law Blythe (Mrs. Tim Browne), and grandsons Ellis and Weston.

The Pro Football Hall of Fame’s Ralph Hay Pioneer Award is named after the former owner of the Canton Bulldogs who organized, planned, chaired the NFL’s founding meeting in his downtown Canton Hupmobile showroom on Sept. 17, 1920.

PAST RECIPIENTS OF THE PIONEER AWARD

2012 - Art McNally … Devoted his entire professional career to officiating and pioneered numerous innovations for the NFL including instant replay.

2004 - City of Pottsville, Pennsylvania … Loyal support of the NFL and undying spirit and pride in the history of the defunct Pottsville Maroons of the 1920s.

1972 - Fred Gehrke … Los Angeles Rams halfback who devised idea of logos on helmets and painted horns on Rams helmets in 1948.

The countdown is on. In less than a month, Green Bay’s beloved son Brett Favre will be officially inducted into the Pro Football Hall of Fame.