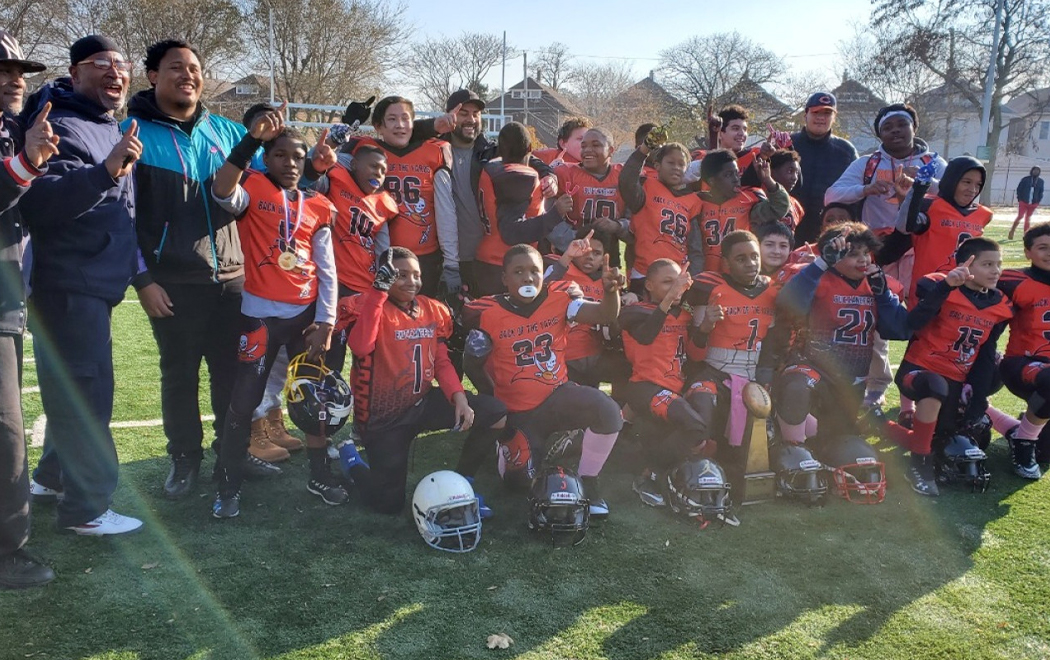 The Pro Football Hall of Fame has made a donated to the youth football team from Back of the Yards to help bring them to Canton for a national tournament in December. We encourage you to help support

The team is facing a tough opponent: traveling expenses for 25 kids and three coaches. But like the championship team they are, the Buccaneers have mounted a last-minute drive in the form of a GoFundMe campaign in hopes they can cross the financial goal line and represent Chicago in the national tournament.

So far, the campaign has raised more than $8,300 of a $12,000 goal, but it needs a little push to get into the end zone, said league founder and coach Anthony Martinez.

The father of a 6-year-old daughter and 3-year-old son, Martinez, 31, does not have a child on the team but has coached for years, beginning when he coached his younger brother at age 19.

“… I coached him and I’ve stuck with it ever since,” Martinez said. “When I coached him, it was in McKinley Park but I didn’t like the direction the program was going so I was going to stop coaching. But all our best players came from Back of the Yards and they were like, ‘Coach, we don’t want to play without you.’ So I got with two other coaches and talked about starting another program.”

Martinez explained the team plays in the Chicagoland Youth Football League and not the more well-known Pop Warner.

“We used to be Pop Warner but it’s too expensive for us. Where we’re from, money will always be an issue. We couldn’t afford Pop Warner so we are in the CYFL, the Chicagoland Youth Football League,” Martinez said.

While the financial challenge to get to the national tournament is more immediate — it takes place Dec. 11-15 — this isn’t the first time the league has faced a monetary opponent. Three years ago, when Martinez founded the team, he did not get much support.

“The community, the alderman, no one supported us. The two other coaches helped as much as they could but it was me contacting other programs looking for spare shoulder pads and helmets. People would donate a little but everything else came out of my pocket,” Martinez said, explaining many of the parents are too busy working to support or even attend games.

“If you ever come to our games, you would see other sidelines full of parents. For us, there are like five or six parents,” he said. “It’s sad, but that’s what we have to deal with.”

That first year, only about 60 boys signed up for four teams, making it necessary for some to play offense and defense. Despite that, the Buccaneers have won league championships each of their three years. This year was the first time the team of 11- and 12-year-olds were invited to go to Canton, Ohio, where teams from all over the country will play in a national tournament — something Martinez was hesitant to tell the boys about at first.

“At first I didn’t want to tell them that we got invited because I knew there was going to be a cost to it and I didn’t want to hurt them knowing they got invited but can’t go because of money. I spoke to a parent, Ruth Rojas, who said we have to try. She spoke to another mom, Monica Alvarez, who put together the GoFundMe page,” Martinez said. “Those two moms did everything.”

Now, with two-thirds of the campaign funded, Martinez said the boys are very excited to be in the red zone.

There’s a reason to be optimistic: Just last week, a Woodlawn youth football team and cheer squad that couldn’t afford a trip to a Florida championship managed to raise more than $20,000 from generous people across the country.

Now, the Woodlawn team is getting new equipment as well as a trip to nationals.

“We’re not begging but would like a little help. It would be really awesome for the boys to get to go,” Martinez said.

Here are your official power rankings for Week 14 of the 2019 NFL season.

Here are your official power rankings for Week 13 of the 2019 NFL season.