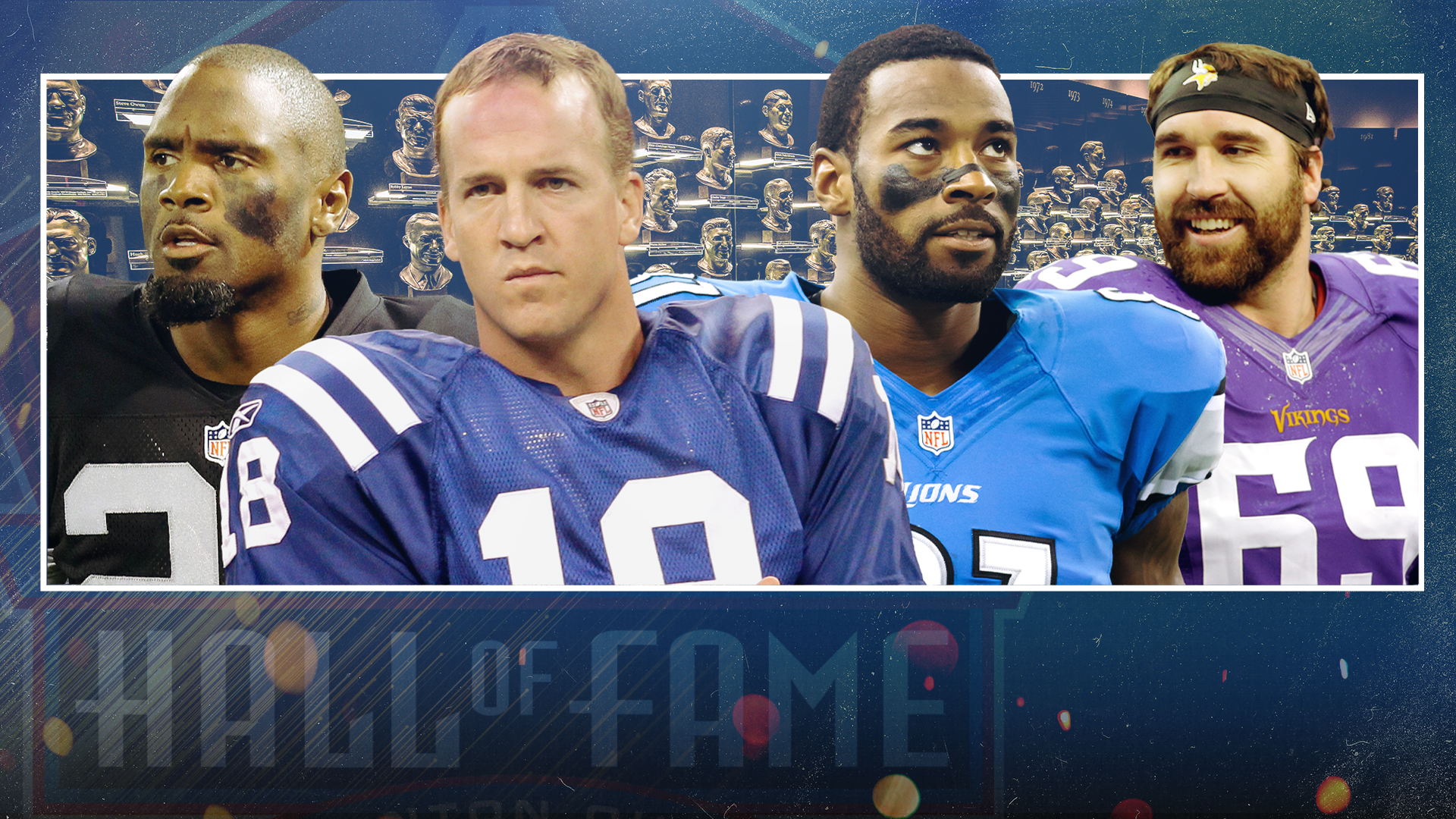 The 15 Modern-Era Player Finalists for the Pro Football Hall of Fame’s Class of 2021 is comprised of six individuals who are finalists for the first time, including four first-year eligible players: defensive end Jared Allen, wide receiver Calvin Johnson, quarterback Peyton Manning and defensive back Charles Woodson. Two others — defensive back Ronde Barber and linebacker Clay Matthews Jr. — have been eligible for the Hall of Fame previously, but this year marks their first time as finalists.

The 15 Modern-Era Player Finalists will be considered for election to the Hall of Fame when the Hall’s Selection Committee meets virtually January 19, 2021. The full committee will elect up to five Modern-Era Players, who must receive a minimum positive vote of 80 percent for election. Three others — Tom Flores, Bill Nunn and Drew Pearson, the finalists in the Coach, Contributor and Senior categories, respectively — also are candidates for the Class of 2021. Voting on each will be held individually, in conjunction with the meeting to decide the Modern-Era Player Finalists.

The Modern-Era Player Finalists were determined by a vote of the Hall’s Selection Committee from a list of 130 nominees named in September that was reduced to 25 Semifinalists on Nov. 24.

The 2021 Modern-Era Player Finalists with their positions, years and teams:

To be eligible for election, Modern-Era Players must have last played more than five seasons ago.

Quickly became face of the expansion franchise … Sat out rookie training camp with knee injury, saw first action in Week 4 … First career start came following week in franchise’s first victory … Earned All-Rookie honors … Regarded as an elite tackle in the NFL during career … Noted for superb foot speed and agility … Persevered through numerous injuries … Leader of team that led expansion Jaguars to AFC championship game by second season … Anchored offensive line that helped team to four straight playoff appearances with records of 9-7, 11-5, 11-5 and 14-2 from 1996-99 … Picked as team’s Most Valuable Player in 1998 after helping Jaguars to team’s first division title …  Voted to five straight Pro Bowls (1997-2001) … Named First-Team All-Pro three consecutive seasons … Selected to the NFL’s All-Decade Team of the 1990s despite only playing in half of the decade … Suffered severe shoulder injury that ultimately ended career and was placed on injured reserve after three games, 2001 … Houston Texans’ first pick of 2002 expansion draft but injury prevented him from playing again.

One of the most prolific defensive backs in the Packers’ storied history and among premier safeties of his era … Led the team in interceptions five times … Key member of defense that guided team’s resurgence that included seven playoff appearances in nine-season span … Helped lead Packers to three straight division titles (1995-97) and two Super Bowl appearances … Started at strong safety in three consecutive NFC Championship Games and Super Bowls XXXI and XXXII … Had seven tackles and one sack in Packers’ 35-21 victory over New England Patriots in Super Bowl XXXI …  Intercepted a pass in every season but his last … Career stats: 38 interceptions for 533 yards … Only pick-six came on 90-yard return versus San Diego Chargers, Sept. 15, 1996 … Registered 20.5 career sacks and one fumble recovery for a TD … Selected to four Pro Bowls … All-Pro four times (1993, 1996, 1997, 1998) … Named to NFL’s All-Decade Team of the 1990s.

Dominant wide receiver during his nine-season NFL career … Selected second overall in the 2007 NFL Draft by the Detroit Lions, where he played his entire professional football career … Started in 130 of his 135 career games … Nicknamed “Megatron” for strong, robotic like abilities on the field … Seven seasons with 1,000-plus receiving yards … Earned NFL pass receiving yardage titles in 2011 and 2012 … At time of retirement in 2015, held NFL records for receiving yards in a season (1,964 yards in 2012) and most consecutive games with a 100 or more receiving yards (8) … Still holds the Lions’ record for most receptions (731) and receiving yards (11,619) … Career stats include 731 receptions for 11,619 yards and 83 touchdowns… Earned Pro Bowl honors six consecutive years (2011-16) … First-Team All-Pro three times; second team once … Selected to the NFL’s All-Decade Team of the 2010s.

Undrafted. Signed by New Orleans Saints in 1986 after playing three seasons in USFL

Integral member of defense that helped Patriots to six division titles over seven-season span … Patriots teams posted 10 or more wins seven times during his eight seasons with team … Led Patriots in sacks twice (2002, 2008) … Registered a career-high 8 sacks in 2008 … Amassed 57.5 career sacks … Recorded 3 or more sacks in every season but one … In games in which he recorded a sack, teams had a record of 46-8 (.852) … Returned fumble a franchise-record 68 yards for TD against Buffalo Bills on Oct. 3, 2004 … Recorded 39 passes defensed, two interceptions in career … Played in four AFC Championship Games and four Super Bowls, including victories in Super Bowls XXXVI, XXXVIII and XXXIX … Selected first team All-Pro three consecutive seasons (2003-05) and second team twice (2006, 2011) … All-AFC five times … Voted to seven Pro Bowls … Named to the NFL’s All-Decade Team of the 2000s.

Made immediate impact for Raiders after being drafted fourth overall in 1998, earning AP Defensive Rookie of the Year award and a Pro Bowl berth … Intercepted at least one pass in each of his 18 seasons (one year shy of Darrell Green’s NFL-record 19) … Totaled 65 career interceptions, tied for fifth in League history … Fourth in NFL history for passes defensed with 183 … Twice led NFL in interceptions (nine in 2009; seven in 2011) … In 2014, became first player in NFL history with 50 career interceptions and 20 sacks … Forced 33 fumbles and recovered 18 … AP Defensive Player of the Year in 2009 … Member of NFL’s All-Decade Team of the 1990s … First-Team All-Pro three times … Elected to nine Pro Bowls … Appeared in Super Bowl XXXVII with Oakland, contributing five tackles and an interception in 48-21 loss to Tampa Bay … Contributed two tackles in 31-25 Green Bay victory over Pittsburgh in Super Bowl XLV … Co-holder of NFL record with 13 career defensive touchdowns … One of only two players (with Hall of Famer Marcus Allen) to win Heisman Trophy, AP Rookie of the Year, AP Player of the Year and a Super Bowl title in his career.

The Pro Football Hall of Fame’s Class of 2021 will be introduced during the broadcast of “NFL Honors,” a two-hour primetime awards special to air nationally on the eve of Super Bowl LV at 9 p.m. (ET) on CBS. In addition, the NFL and The Associated Press will announce their annual accolades during the broadcast.

The annual Pro Football Hall of Fame Fan Vote presented by Ford continues since its launch in September. Fans can vote as many times as they wish at www.profootballhof.com/fanvote to predict the five Modern-Era Players who will be elected to the Hall of Fame as part of the Class of 2021.

Fans who vote automatically become eligible for several sweepstakes prizes, including a Grand Prize trip for two (2) to the 2021 Enshrinement Week Powered by Johnson Controls in Canton.

This marks the 11th consecutive year that Ford, the Official Automobile of the Pro Football Hall of Fame, has invited fans to predict the outcome of the annual Hall of Fame class. More than 25 million votes have been cast in the past decade.

The Pro Football Hall of Fame’s Class of 2021 and the Centennial Class of 2020 will be enshrined in separate ceremonies as the Hall celebrates “Twice the Fun in ’21.”

The 2021 Enshrinement Week Powered by Johnson Controls will include:

Official Ticket Packages for the 2021 Pro Football Hall of Fame Enshrinement Week Powered by Johnson Controls are on sale from Hall of Fame Experiences. Head to www.HOFExperiences.com to secure your spot to see the Class of 2021 enshrined. Ticket packages also can be obtained by calling 844-751-0532. Packages range from single-day offerings to four-day experiences that include premium seating, VIP access, exclusive parties and more.

Tickets for the Centennial Class of 2020 Enshrinement are available by clicking here.

Individual tickets for the Class of 2021 Enshrinement, Gold Jacket Dinner and Concert for Legends will go on sale in the Spring.

What To Look For - Wild Card Weekend

The National Football League is about to put the “wild” in its Super Wild Card Weekend.

Third group of 'Superfans' to be honored at Hall of Fame during Enshrinement Week.