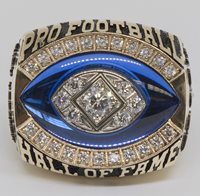 During the “Monday Night Football” matchup between the Philadelphia Eagles and the Minnesota Vikings, Coach Vermeil will receive his Ring of Excellence. Hall of Fame President Jim Porter will be on hand at Lincoln Financial Field for the ceremony. The game is set to kick off at 8:30 p.m. ET.

All three representations of membership in sports’ most exclusive club will be displayed during the special presentation for Eagles fans to pay tribute to Coach Vermeil.

Hall of Fame Ring of Excellence

The outer diamonds create a “stadium” effect surrounding the football-shaped diamond center. The vibrant blue gemstone was selected both for appearance and meaning, as blue is often associated with confidence, power and integrity — all traits of these incredible, legendary football icons.

Additionally, a special arbormark (or engraving) appears on the inside of the ring — 361 — which is his Enshrinee number.

ART McNALLY’s grandchildren, Connor and Shannon O’Hara, received McNally’s Ring of Excellence on his behalf at the 2022 Hall of Fame Game, as he was not able to attend in person. Other members of the Class of 2022 will receive their Rings of Excellence throughout the 2022 NFL regular season.
Previous Article

To help recap Week 1 and break down Week 2 of the NFL schedule, joining 'The Mission' is Buffalo Bills legend Andre Reed, a member of the Pro Football Hall of Fame’s Class of 2014.

Nine players in their first year of eligibility are among the list of 129 Modern-Era Nominees for the Pro Football Hall of Fame’s Class of 2023.