"All I ever wanted to be was a football man.” 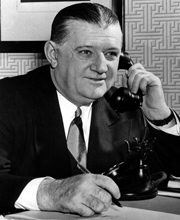 It wasn't long after Bert Bell was elected the National Football League's commissioner in January 1946, that he demonstrated he would be a fearless, tireless leader who would guide the league to new heights of popularity.

Bell's first order of business was to prepare his league for a costly struggle with the new rival league, the All-America Football Conference. Steadfastly rejecting any settlement that would leave the AAFC intact, Bert finally presided over a "merger" after the 1949 season that brought three AAFC teams – Baltimore Colts, Cleveland Browns, and San Francisco 49ers – into the NFL.

In Bell's first year as commissioner, he also took a strong anti-gambling stance that marked the start of tough conduct codes in the NFL. Another far-sighted action was Bell's handling of the-then young television industry. Realizing that televising home games would hurt stadium attendance and much-needed team revenues, Bell formulated the policy to permit only road games to be televised back to home cities, thus protecting gate revenues while making previously unavailable away games accessible to fans.

Bell exhibited a rare fortitude when he first recognized the NFL Players' Association. Confronted by angry owners, he simply referred to the league's constitution, which permitted him to act on any matter "in the best interests of pro football." Bell began his pro football life as the founder-owner of the Philadelphia Eagles in 1933 and struggled with overwhelming financial adversity for the rest of the decade. A unique franchise shift in 1940 found Bell moving to Pittsburgh as part owner of the Steelers, a status he maintained until he was selected as commissioner. On October 11, 1959, while watching his "two teams," the Eagles and Steelers, play at Philadelphia's Franklin Field; Bert suffered a fatal heart attack. The fact he died at an NFL game seemed appropriate for a man who had made pro football his entire life. 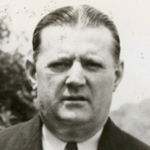 My friend Bob Considine and friends. I cannot make a presentation personally to the recipient of this award because he has left this globe but it is fitting indeed that Arthur Rooney, personal friend of mine, President of the Pittsburgh Steelers, is designated to accept this honor for Bert Bell, and Bert you know Art knew him very intimately for so many years as a close friend and as an associate. It’s more than proper that Bert Bell should be among the first memorialized in this magnificent hall for it was Bert's genius as a commissioner or czar, if you will, that brought professional football to its present high plane. During the games rise he literally did everything.

In fact, they say he even use to lace up the football. He gave pro football the draft system which practically equalized every team and also, he gave pro football the player benefit plan, the best of its kind, and also, he gave his lift to football. He was the founder, the president, manager, the coach, the press agent, the bookkeeper, the cashier, of the Philadelphia Eagles indeed was the Eagles themselves. He sold out his interest in the Eagles to become part owner of the Pittsburgh Steelers with Art Rooney. Finally, other club owners persuaded him to become commissioner of football. No administrator ever took such rich experience to an office. As an ex-player, ex-coach, and ex-owner, Bert knew the bales, he knew the needs, he knew the tricks, he knew the problems, and he knew the alibis of them all. He kept his ear open because his phone was by his bed at all times and of course at his office and Bert Bell died as he had lived at a football field. His two old teams the Steelers and the Eagles were battling in Franklin Field in Philadelphia where a half century before it had all begun for him as Penn’s rich boy quarterback. So, Art Rooney for Bert Bell is the presentation.

I am grateful to the Bell family, Mrs. Francis Bell, her children, Janey, Bert, and Upton for permitting me the honor in accepting in their behalf this honor to Bert Bell which is so richly deserved. Like Dave McDonald said, like George Halas was and is, Bert was player, coach, owner, and Commissioner.