"Football is the reason for everything I've ever been able to have. That's why it's so important to me. It's everything for me." 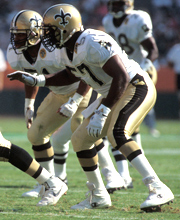 One of the key players that fueled the New Orleans Saints transition from perennial losers into contenders in the late 1980s was linebacker Rickey Jackson. The club drafted Jackson out of Pittsburgh in the second round of the 1981 NFL Draft.

He made an immediate impact as a rookie when he led the team with a franchise rookie record eight sacks and was also the Saints’ leading tackler. He had another productive year during the strike-shortened 1982 season.

In 1983 he established himself as an elite pass rusher in the NFL when he recorded 12 sacks. That year marked the first of six double-digit sack totals in his career. It also earned Jackson a trip to the Pro Bowl for the first time. In all, he was named to the Pro Bowl six times including his final year in New Orleans in 1993.

He was named first-team All-Pro in 1986, 1987, 1992, and 1993. As Jackson raised his play to a new level, the team also began enjoying a new string of success. The Saints registered its first winning season and the first playoff appearance in franchise history after they finished 12-3 in 1987. Leading the way was Jackson who recorded 9.5 sacks, 74 tackles, three forces fumbles, and two interceptions. More winning followed when the Saints captured their first-ever division title in 1991. Jackson helped the cause with 11.5 sacks, 59 tackles, three forced fumbles, three fumble recoveries, and three passes defensed. New Orleans never finished below .500 during Jackson’s final seven years with the team.

After 13 seasons with the Saints, Jackson finished his NFL career with two final seasons with the San Francisco 49ers who converted him to defensive end and turned him into a pass rush specialist. In his first year in the Bay area, Jackson enjoyed a championship run with his new team capped by a victory over the San Diego Chargers in Super Bowl XXIX. He started at right defensive end for the 49ers in that game and chipped in with two tackles.

Jackson retired after the 1995 season with 128 career sacks that does not include his rookie total since the sack did not become an official statistic until 1982. He also intercepted eight passes during his 227-game NFL career.

(at time of his retirement following 1995 season)

s San Francisco 49ers All other titles with New Orleans 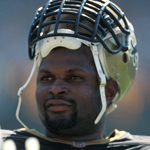 Transactions: August  2, 1994 – Jackson signed as a free agent with the San Francisco 49ers.

Tom Benson (presenter):
Rickey Jackson was born to play football. The opposing team had to be well prepared or he was going to give them hell. He gave his heart and soul, his body tothis game.

Narrator (Steve Sabol):
In fifteen Hall of Fame seasons Rickey Henderson Jackson, would unleash that fury on opposing offenses across the National Football League.  Leaving running backs in his wake and quarterbacks on their back.

Benson:
If he didn’t get a sack or two in a game he got down on himself a little bit. He had a unique ability,it seemed like at the right time to get in there and attack the quarterback.  I can tell you the opposing team’s quarterback, boy they didn’t like Rickey Jackson and I don’t blame them.

Benson:
Not only the sacks and tackles and so forth, it’s the energy and the commitment to playing football.  He loved every minute of it and he really worked hard at it. In thirteen seasons he didn’t miss but only two games. He broke his jaw in an automobile wreck. But I’ll tell you this if it had been left up to him he’d of played in those games.  I’d like to show you this helmet that he wore so he could still play. Look at the front of this thing. Now I’m gonna tell you it’s heavy, it’s hard enough for me to hold up much less have on my head. This was Rickey Jackson.

Narrator:
A stalwart on the field and in the locker-room from the day he donned the Fleur-de-LisJackson became a major defensive force, assisting the Saints rise from perennial laughing stock to league wide respectability in the late 1980’s.

Narrator:
A Saint in thirteen of his fifteen NFL seasonsRickey Jackson’s tireless work ethic off the field and his focused intensity on it that led him to be the first player who played the majority of his career as a Saint to be enshrined in Canton.

Tom Benson:
At the Super Bowl I was honored to watch him do a little practice.  Somebody came up to me and told me that Rickey had been announced to be in the Hall.  Here we are playing in the Super Bowl for the first time in 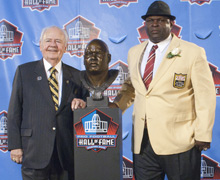 Saints history.  Just what a tremendous feeling I had, to me this is really just something to be very important to this club, important to the fans. Rickey has given us this. It is my honor to present Rickey Jackson to the Pro Football Hall of Fame.  Wow.

Rickey Jackson:
Boy, I didn't know I did all that. But I tell you what, I give honor to the spirit of Christ who is the head of my life.  You know, I tell you, I'm from a small town called Pahokee, Florida.  Me, I think that I love my hometown, you know me better than anybody in the world.  That's what I cherish, my hometown, because I'm from a little town on a lake called Pahokee.  What is unique about it, we are surrounded by water, we are surrounded by sugar cane, a lot of different vegetables.  What we can do there in Pahokee you can't do in a lot of places so I really love my hometown, you can always go fish, you can go hunt, you can go get vegetables, different stuff.  You can live.  A lot of places you can't live.  I love my hometown a whole lot.

I started off with my hometown.  So I go like this.  My elementary year coming up.  My coach started me playing football when I was six years old.  I mean, I was in the sixth grade, Coach Rhodes.  He's out there now.  I started playing.  I got to be 13.  I realized I knew I was going to be a great football player.  I always wanted to play football.  What enticed me to really try to play football was you come to Pahokee, they have on the sign, Welcome to the home of Mel Tillis.  He was a country singer.  We had things around my hometown that you could do wrong if you choose to do wrong.  I wanted my name on that sign.  I tell you what, I wasn't going to do nothing to try to mess my career up to keep my name off of that sign.

So a lot of my friends, they went the wrong way.  Man, I wave my hand to them because I was trying to get my name on that sign.  I tell you, I end up going to the University of Pittsburgh, what has a lot of great athletes there.  You got the Russ Grimm, Dan Marino, Mark May, Compton, Williams.  We have so many great players there.  Like you saying, we have 19, but we have four or five that tried out but wasn't drafted.  When I went there on a recruiting trip, we had Tony Dorsett showing most of us around.  They had just won the national championship.  They was 12-0.  You know, that's what made everybody come back there.  We went back there and had a great time together, bunch of great men.

A lot of us, like me and Russ Grimm, went there as freshmen, we were best friends as freshmen, believe it or not.  Best friends our senior year, graduating together.  One thing I can say, coach Jackie Sherrill, he put a lot of men's together from all walks of life.  A lot of them you didn't know where he was coming from, but you knew they were coming there to play great football.

I don't want to leave none of my coaches out.  You’re going to leave some out.  Bum Phillips drafted me with the Saints.  That's how I got with the Saints.  He did a great job.  Him and John Paul Young and that Elway fellow, they did a great job keeping me focused.  Then Coach Mora came around and he brought Big Fat Zero and Sidwell and them there and they did a good job with me.

You know, I hate to go back to my high school, but my high school principal was Coach Russell.  He did a great job with me.  He was a head coach, too.  And Coach Hyman.  Those guys coached me to do the right thing.

One thing about Coach Rhodes is we had games on Friday.  He would take all the good players home with him and make sure that we was able to come back to the game that night.  That's the kind of hometown I had.  We had a special hometown.

But I can get up here and I see these guys around me, knowing that I think I deserve to be up here.  I see the things that I did on the field.  Football has always been my life.  I see that in these guys here, man.  These Hall of Famers here, I just seeing how these guys carry themselves, the love they had for football.  We need to keep football going.  Can't let football get away.  I mean you can get where the product can be so good, you can lose sight and let it get away.

My owner, he went one time and then won.  We go back again this year, we win.  I think he should be up for the Hall of Fame.  Not only that, I mean, keeping the Saints in New Orleans.  The Saints went through Katrina.  They come back, go through the oil spill now.  None of that would have been a disaster.  If they lost the Saints, it would have been ten times worse than all that so I take my hat off to them.   A lot of people say why you pick Mr. Benson do this or that?  Ain't nobody for New Orleans than the Saints and Mr. Benson because he is the one who kept the Saints in New Orleans.  I tell you what, a lot of teams left in the middle of the night taking their teams other places.  He could have did the same thing that some of the other guys did.  You got to take your hat off to somebody when they doing right, and I take my hat off to him.  He could have tookthe Saints and moved them to California or San Antonio.  If Katrina did us like that, oil spill did us like that, imagine losing the Saints.

My last couple words I want to say is me getting back home, I lost my mother, I went back home, spent a lot of time with her.  Found me a good church.  I got into the church.  It steered me in the right direction.  Man, I can say to all y'all in here, find you a church home and make sure you get Christ in your life.  You hear what I'm saying?  I see T.D. Jake out there.  I get up every morning with him on my TV station.  My bishop, Robert Banks.  I got two guys in my life that keep me going the right way.