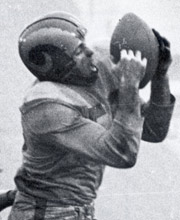 Tom Fears was a big-play receiver with the Los Angeles Rams from 1948 through 1956. He first played football at Santa Clara, took three years out for military service during World War II, and then finished up with a pair of All-America seasons at UCLA.

Although originally drafted as a defensive back, Rams coaches realized his ball-hawking skills would be best utilized on offense. It was a wise decision. Fears went on to lead the league in receptions in each of his first three NFL seasons. He improved his total each year, setting a new league record with 77 catches in 1949 and then smashing his own mark with 84 in 1950.

In a game against the Green Bay Packers that year, Tom caught a then-league record 18 passes. One week later, the Rams defeated the Chicago Bears 24-14 to win the NFL Western Division title and Fears scored all three touchdowns on sensational pass plays of 43, 68, and 27 yards.

Although the 6-2, 216-pound Fears did not possess unusual speed, he ran extremely precise patterns, specializing in the buttonhook route, and was absolutely fearless when catching in a crowd. Time and again Tom demonstrated his big-play abilities, but no play was more memorable than his game-winning reception in the 1951 NFL Championship Game against the Cleveland Browns. In the fourth quarter, with the score tied at 17 apiece, Fears grabbed a short 13-yard toss from quarterback Norm Van Brocklin and raced an additional 60 yards for the tie-breaking touchdown and victory. It was the Rams first title since moving from Cleveland following the 1945 season.

While one play doesn't make a successful career, in Fears' case, such heroics were standard achievements for nine seasons with the Rams. His career marks include 400 receptions for 5,397 yards and 38 touchdowns. 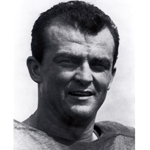 Thank you guess, friends with the football Hall of Fame. Tom fears with the Los Angeles Rams, now head coach for the New Orleans Saints, has been selected to be enshrined in this eighth annual Hall of Fame ceremonies. This distinct honor comes to Tom after being associated with professional football for 9 years as a player, for Seven years as an assistant coach, and is now starting his fourth year as the head coach of the New Orleans Saints. There is no doubt in my mind that Tom has dedicated his full life to professional football and there's no doubt in my mind that Tom's Association with professional football is at a midpoint and his contributions to the technical aspects of the game and the leadership on the playing field will continue in the years to come. The career of Tom has been one challenge, adversity and doubt and finally coming through in triumph. The challenge to Tom came as a rookie player for the Rams in 1948. He reported to the Rams after the college All-Star game where he represented his school, UCLA. His best prospects for making the team seem to be as a defensive to become a pass catcher. After a struggling start, learning the intricate pass patterns designed by coach Clark Shanassey. By midseason, Tom had won a starting position in his rookie year. He led the NFL in pass receptions in his rookie year of 1948 and continued in 1949 and 1950. During his career he set records not only for most passes received per season, most passes caught per game, and most long gainers in a single season. But the real statistic of Tom which got him in the Hall of Fame should be under these categories: First, the most passes caught on a third down-six yard to go situation. Second, the most passes caught in the final five minutes of a game keeping the winning drives going and third, the most long touchdown passes caught in the key championship games that the Rams played against the Chicago Bears and the Cleveland Browns. At this time, I want to present my good friend, Mr. Tom fears.

Thank you, Hal, fellow Enshrinees Commissioner Rozelle, and honored guests.  I am very happy, extremely happy, I am also very nervous. I think I'm the first coach that's enshrined when he has a team to field out there in another hour and a half. I'm certainly honored. I'm honored to be enshrined with people like Christiansen, Pihos, McElhenny and all the ones who have preceded them. People who I've looked up to all my life, so I am certainly in find company. Proud, I'm very proud to be here, I am proud mostly for the people that are mostly responsible for me being here, my father and mother, who are deceased, and also my high school coach, Jim Bluet, one of my college coaches, Lin Casanova, and my head buckshaw, I went into the service and I came back, played for Burtler Busher at UCLA and I had fine coaching in the pro ranks as Hal mentioned Clark Shanassey, who has just recently passed away, and also another former enshrinee, Joe Stydahar. They’ve been a great help to me and without them I wouldn't be here. I want to thank the newspaper writers out of the 26 cities who voted on the players and felt that I should be honored here. I want to thank the good people of Canton and I hope we give you a real good game here this afternoon. Thank you very much.