Planning for the Cincinnati Bengals franchise began three full years before the team began playing in the American Football League in 1968. Paul Brown, who had enjoyed exceptional success as the head coach of the Cleveland Browns for 17 seasons before departing in 1962, had the urge to get back into pro football. In 1965, he met with then-Governor Jim Rhodes and the two agreed the state could accommodate a second pro football team. 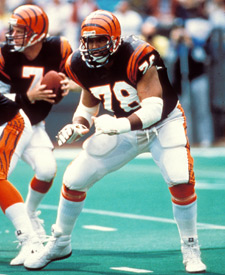 A year later in 1966, Cincinnati's city council approved the construction of 60,389-seat Riverfront Stadium, which was scheduled for completion by 1970. The next year, a group headed by Brown was awarded an American Football League franchise that would begin play in 1968. Brown named his team the Bengals in recognition of previous Cincinnati pro football franchises with the same name in the 1930s and 1940s. Brown himself returned to the coaching ranks on the Bengals sidelines for the first eight years. He retired after the 1975 season but continued to serve as general manager until his death in 1991. Mike Brown then succeeded his father as general manager.

The 1968 Bengals won their first two home games in 28,000-seat Nippert Stadium against Denver and Buffalo and finished with a 3-11 record, the most an expansion team of the 1960s recorded. Cincinnati improved enough in 1969 that Brown was named the AFL Coach of the Year. In 1970, they captured the AFC Central division title and thus became the first expansion team to win a championship of any kind in just three years.

In 1971, the Bengals selected Ken Anderson, a quarterback from little-known Augustana College, in the third round of the draft. For the next 16 seasons, Anderson was the key man of the Cincinnati offense and a four-time AFC individual passing champion. Cincinnati won its second AFC Central championship in 1973 and a wild-card berth in the 1975 playoffs in Brown's final year as coach. The Bengals missed the playoffs for the next five seasons but won big in 1981, the year the Bengals unveiled their new uniforms with tiger-striped helmets, jerseys and pants. Cincinnati, with Forrest Gregg as coach, won the AFC Central with a 12-4 record and defeated San Diego 27-7 in the AFC championship game. However, they lost the Super Bowl XVI showdown with the San Francisco 49ers, 26-21.

The Bengals had a second shot at the Super Bowl following the 1988 season when, under Coach Sam Wyche and quarterback Boomer Esiason, they improved from the dismal 4-12 record in 1987 to a 12-4 regular-season record. They then defeated Buffalo 21-10 for the AFC championship. But in Super Bowl XXIII, they lost 20-16 to the 49ers on a last-minute touchdown pass by Joe Montana. In addition to Anderson and Esiason, the Bengals have been able to boast of many outstanding players since their first game in 1968. None, however, was more outstanding than tackle Anthony Muñoz, a first-round draft pick in 1981. A perennial all-pro choice, the USC graduate was selected to play in 11 straight Pro Bowls from 1982 to 1992 and was inducted into the Pro Football Hall of Fame in 1998.