The Denver Broncos have been one of pro football's biggest winners since the merger of the American and National Football Leagues in 1970. The Broncos' on-the-field success is more than matched by a spectacular attendance record of sellout crowds (except for strike-replacement games) every year since 1970. Denver's annual sale of approximately 74,000 season tickets is backed by a waiting list in the tens of thousands. The Broncos now play in the new INVESCO Field at Mile High which opened in 2001, but for 41 seasons played on the same plot of ground on which the original AFL team performed in 1960. This, however, is the only similarity of Denver teams of yesteryear and today. The upstart AFL was the target of many jokes and jeers by the established National Football League in the early 1960s, but the Broncos were the most laughed-at of all. 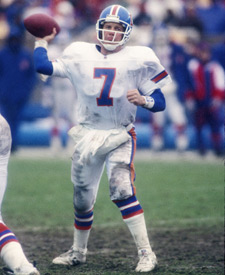 Bob Howsam, a successful minor league baseball owner who built Bears Stadium in the 1940s, was awarded an AFL charter franchise on August 14, 1959. Severely limited financially, Howsam clothed his first team in used uniforms from the defunct Copper Bowl in Tucson, Ariz. Making the uniforms particularly joke-worthy were the vertically-striped socks that completed the Broncos' dress. Two years later, when Jack Faulkner took over as head coach and general manager, the socks were destroyed in a public burning ceremony.

While Denver's on-the-field experience during the 10 years of the AFL was for the most part bleak, the Broncos did have some bright moments. On September 9, 1960, they won the first-ever AFL game with a 13-10 victory over the Boston Patriots. On August 5, 1967, they scored the first win ever for an AFL team against an NFL opponent with a 13-7 triumph over the Detroit Lions. But at the end of the AFL's decade, Denver's 39-97-4 record was the worst for any of the original eight AFL teams.

Denver's current attendance bonanza can be traced to a remarkable turn of events in 1965 that first threatened and then assured the future of pro football in the city. Several minority partners formed a majority voting block to sell the Broncos to Atlanta interests, but, at the last minute, the Phipps brothers, Gerald and Allan, who had been left out of the voting block, bought the team and 34,657-seat Bears Stadium. Excited fans showed their appreciation by purchasing almost 23,000 season tickets, compared to 7,996 the year before.

In their 14th season in 1973, the Broncos under Coach John Ralston finished 7-5-2 for their first winning season ever. Thus started a trend that saw the Broncos fall below the .500 mark only three times in the next 20 seasons. In the 14-year period between 1977 and 1991, the Broncos won seven AFC Western Division titles and AFC championships in 1977, 1986, 1987 and 1989. It was the kind of success the Broncos' founders could not, with good reason, possibly have imagined.