It was official. On November 30, 1993, at 4:12 p.m., an incredible four-year campaign was over. The Jacksonville Jaguars were to be the 30th franchise of the National Football League. Jacksonville's incredible drive actually began on August 17, 1989, when Touchdown Jacksonville!, a partnership, was formed to lead the community effort to win an NFL franchise. Jacksonville businessman Tom Petway led the group. 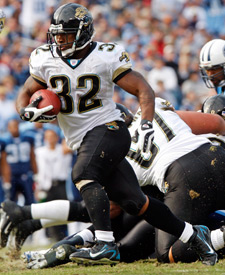 On September 16, 1991, armed with a $60 million commitment from the Jacksonville City Council to renovate the Gator Bowl, Touchdown Jacksonville!, Ltd. filed an expansion application with the NFL. The application listed a nine-member partnership that included Petway and J. Wayne Weaver who now serves as the club's Chairman and CEO. One of eleven cities to apply, Jacksonville was considered by many to be the longest shot on the board. Still, that didn't keep the Jacksonville group from confidently announcing that the team would be named "Jaguars" if awarded one of the two available expansion franchises.

Jacksonville survived the first round of applicant cuts, when on March 17, 1992, at the NFL's annual winter meeting, the list of eleven was reduced to seven. Two months later, the expansion race was narrowed to five possible choices: Jacksonville, Baltimore, St. Louis, Charlotte and Memphis. The remaining applicants' spirits were somewhat dampened, however, when on October 20, 1992, the NFL owners, citing complications surrounding the ongoing NFL labor situation, voted to delay the expansion vote until their fall 1993 meeting. Fortunately, on January 6, 1993, the league and its players reached a seven-year Collective Bargaining Agreement. On March 23, 1993, the expansion race officially resumed.

The Jacksonville contingent quickly scheduled a tour of the Gator Bowl for NFL officials, after which Touchdown Jacksonville!, Ltd. managing general partner J. Wayne Weaver was informed that additional renovations beyond those already planned would be necessary to renovate the stadium to NFL standards. Unable to come to a satisfactory solution to the stadium renovation financing problems with the City Council, Touchdown Jacksonville!, Ltd. announced it was withdrawing from the NFL expansion race.

However, community spirit and Weaver's sense of vision prevailed. Less than a month after renovation financing talks broke off, a new plan was proposed that would cap renovation costs at $121 million. Both sides agreed that $53 million would come from city funds and $68 million from team and team-related sources. Additionally, a committee of civic and business leaders agreed to help by selling 9,000 club seats. Weaver, with the new public / private partnership, met with NFL Commissioner Paul Tagliabue, who welcomed Jacksonville back into the expansion race.

The Jaguars played their first-ever game in Canton, Ohio in the annual AFC-NFC Hall of Fame Game. Their opponent in the pre-season classic was the NFL's other expansion franchise, the Carolina Panthers. From the start, it was apparent that the NFL's expansion draft and the free-agent market had allowed both Jacksonville and Carolina to develop more quickly than expansion teams of the past. Although the Panthers came away with a 20-14 victory, it was obvious that both teams were ready to compete in the NFL. The Jaguars' impressive 4-12 inaugural season record was one win better than the NFL's previous best for an expansion team. The Jaguars have quickly become one of the dominant teams in the NFL and perennial playoff participants. The team reached the AFC Championship game in 1996 and 1999.