The history of the New York franchise in the American Football League is the story of two distinct organizations, the Titans and the Jets. Interlocking the two in continuity is the player personnel which went with the franchise in the ownership change from Harry Wismer to a five-man group headed by David "Sonny" Werblin in February 1963. The three-year reign of Wismer, who was granted a charter AFL franchise in 1959, was fraught with controversy. The on-the-field happenings of the Titans were often overlooked, even in victory, as Wismer moved from feud to feud with the thoughtlessness of one playing Russian roulette with all chambers loaded. 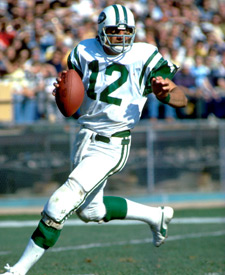 In spite of it all, the Titans had reasonable success on the field but they were a box office disaster. Werblin's group purchased the bankrupt franchise for $1,000,000, changed the team name to Jets and hired Weeb Ewbank as head coach. In 1964, the Jets moved from the antiquated Polo Grounds to newly-constructed Shea Stadium, where the Jets set an AFL attendance mark of 45,665 in the season opener against the Denver Broncos.

Ewbank, who had enjoyed championship success with the Baltimore Colts in the 1950s, patiently began a building program that received a major transfusion on January 2, 1965 when Werblin signed Alabama quarterback Joe Namath to a rumored $400,000 contract. The signing of the highly-regarded Namath proved to be a major factor in the eventual end of the AFL-NFL pro football war of the 1960s.

The 1968 season was the culmination of the New York AFL hopes as the Jets, under the guidance of Ewbank and the play of Namath, Don Maynard and a host of other major contributors, raced to the AFL East title with an 11-3 record. They defeated the Oakland Raiders 27-23 in the AFL championship and then stunned the entire sports world with a 16-7 victory over the overwhelmingly-favored Baltimore Colts in Super Bowl III. It is considered to be one of the two most pivotal games ever toward building fan enthusiasm for pro football. The Jets won the AFL East again in 1969 but lost to Kansas City in a first-round playoff game and did not seriously challenge for a divisional championship for 12 more seasons.

The next decade saw the Jets return to the playoffs five times in 1981, 1982, 1985, 1986 and 1991. Their high-water marks during those years came in 1982 and again in 1986, when they advanced past the first round of the playoffs. In the strike-shortened 1982 season, the Jets advanced to the AFC championship game, losing to Miami 14-0. Through it all, the Jets have maintained an excellent attendance record. They have not fallen below an average-per-game attendance of 54,051 since 1964, their first season in Shea Stadium. The Jets, who now play in MetLife Stadium across the Hudson River in New Jersey, have not had a game not sell out in more than 25 years.

Coach Ewbank (1978) and three players, all of whom stand out in Jets history, have been elected to the Pro Football Hall of Fame. Namath was elected in 1985, Maynard in 1987 and running back Curtis Martin in 2012.