The Eagles have been a Philadelphia institution since their beginning in 1933 when a syndicate headed by the late Bert Bell and Lud Wray purchased the former Frankford Yellowjackets franchise for $2,500. In 1941, a unique swap took place between Philadelphia and Pittsburgh that saw the clubs trade home cities with Alexis Thompson becoming the Eagles owner. 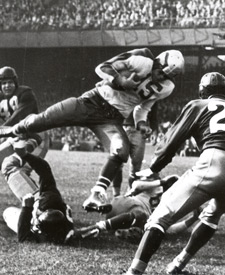 In 1943, the Philadelphia and Pittsburgh franchises combined for one season due to the manpower shortage created by World War II. The team was called both Phil-Pitt and the Steagles. Greasy Neale of the Eagles and Walt Kiesling of the Steelers were co-coaches and the team finished 5-4-1.

Counting the 1943 season, Neale coached the Eagles for 10 seasons and he led them to their first significant successes in the NFL. Paced by such future Pro Football Hall of Fame members as running back Steve Van Buren, center-linebacker Alex Wojciechowicz, end Pete Pihos and beginning in 1949, center-linebacker Chuck Bednarik, the Eagles dominated the league for six seasons. They finished second in the NFL Eastern division in 1944, 1945 and 1946, won the division title in 1947 and then scored successive shutout victories in the 1948 and 1949 championship games.

A rash of injuries ended Philadelphia's era of domination and, by 1958, the Eagles had fallen to last place in their division. That year, however, saw the start of a rebuilding program by a new coach, Buck Shaw, and the addition of quarterback Norm Van Brocklin in a trade with the Los Angeles Rams. In just three years, Shaw gave Philadelphia another championship. Behind Van Brocklin's expert on-the-field leadership, the Eagles won the Eastern division with a 10-2 record and then defeated the Green Bay Packers 17-13 for the NFL championship. Bednarik saved the day for the Eagles with an open field tackle of Green Bay's Jim Taylor on the game's final play.

The Eagles fell just a half-game short of another NFL Eastern conference championship in 1961 but didn't reach the playoffs again for 18 years until 1978, their third season under coach Dick Vermeil. Vermeil's teams played in four straight post-season playoffs between 1978 and 1981. In 1980, Philadelphia won a then club-record 12 games, edged out Dallas for the Eastern division title and then defeated the Cowboys 20-7 for the NFC championship. However, the Eagles lost to the Oakland Raiders 27-10 in Super Bowl XV.

In 1988 the Eagles won the NFL Eastern division championship. Starting with that season, Philadelphia, which was particularly dominating on defense, won 10 or more games for five straight years up to 1993. In four of those years, the Eagles entered the playoffs as a wild-card team, a feat they repeated in 1995.

In 1999 Andy Reid was named the team’s head coach. He instantly transformed the Eagles into one of the dominant teams in the NFL. Beginning in 2000, Philadelphia won their division six times, appeared in the postseason nine times, and made a trip to Super Bowl XXXIX. Reid served as the team's head coach for 14  seasons, the longest tenure of any coach in franchise history. In 2013, University of Oregon head coach Chip Kelly took the Eagles top position and won an NFC East Division title in his first season.