Franchise Owner-President K. S. "Bud" Adams Jr. was one of the founding fathers of the American Football League in 1959. Heisman Trophy winner Billy Cannon from Louisiana State was the first big-name signing of both the Oilers and the AFL. The Oilers were the AFL's first champions, winning back-to-back titles in 1960 and 1961. The Oilers missed a third straight championship in 1962 when they lost 20-17 to the Dallas Texans. At the time, the historic six-quarter contest was the longest professional football game ever played -- 77 minutes, 54 seconds. 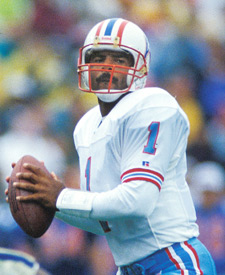 The AFL championships Houston won in its first two years of play remain the only league titles the Oilers have claimed. They won four AFL Eastern division championships in that league's 10-year existence and AFC Central Division titles in 1991 and 1993.

Several coaches have contributed to winning seasons in Houston. Lou Rymkus led the Oilers to their first championship in 1960 while Wally Lemm coached the 1961 AFL title team. Frank "Pop" Ivy won a divisional championship the next year. Lemm returned to guide the Oilers' 1967 AFL East championship. "Bum" Phillips led the Oilers to three straight playoff appearances in 1979, 1980 and 1981 and Jerry Glanville took the Oilers to postseason play three times in four seasons from 1986 to 1989. Houston turned to Jack Pardee to lead the team in the 1990s. He guided his first four teams to the playoffs. The Oilers won their first divisional championship in 24 years in 1991 and repeated in 1993. Jeff Fisher was named interim head coach in November 1994 and officially took over in 1995.

Eight former Oilers stars are now members of the Pro Football Hall of Fame. The fabled George Blanda, who played 26 years and was the Oilers' quarterback from 1960 to 1966, was the first to be inducted in 1981. Ken Houston, one of history's great safeties, was elected in 1986, Earl Campbell, a pile-driving fullback from Texas, was picked in 1991, guard Mike Munchak, a first round draft pick in 1982, was inducted in 2001; defensive end Elvin Bethea, the franchise's all-time sack leader, was elected in 2003 and defensive tackle Curley Culp in 2013. In 2006, the franchise's all-time leading passer, Warren Moon, became the first African American quarterback of the modern era to be elected; and nine-time All-Pro Bruce Matthews was inducted in 2007. Six former Oilers/Titans stars have had their jerseys retired -- safety Jim Norton, Bethea, Campbell, Moon and offensive linemen Munchak and Matthews.

In the 1960s, Blanda was a big-yardage maker with his throws to receivers like Charlie Hennigan, who caught a then-record 101 passes in the 1964 season. The Oilers of the 1980s and early 1990s were powered by quarterback Warren Moon and a host of outstanding receivers.

Houston started its AFL life in Jeppesen Stadium, a high school facility that seated 33,000, before moving to 70,000-seat Rice Stadium in 1965. In 1968, the Oilers moved into the nation's first domed stadium, the air-conditioned Astrodome, thus becoming the first team in professional football to play indoors on synthetic turf. In 1997, the Oilers became the first NFL team to call Tennessee home when the franchise relocated to the Volunteer state. Two years later in 1999, the franchise retired the nickname Oilers and became known as the Titans. The change seemed to bring good luck with it as the Titans went on to win the AFC Championship that year and earn a trip to Super Bowl XXXIV.