The Cleveland Browns were born in 1944 when Cleveland businessman Arthur B. McBride acquired a franchise in the new All-America Football Conference that would begin play in 1946. McBride's first act after acquiring the team was to hire Paul Brown, who had been a very successful high school, college and service coach, as coach and general manager. 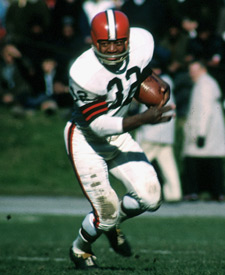 The teams of the AAFC basically were of comparable quality to those of the NFL but, in the first 10 years of post-World War II pro football, the Cleveland Browns proved to be the best in either league. With such all-time greats as quarterback Otto Graham, fullback Marion Motley and tackle-kicker Lou Groza leading the way, Cleveland won all four AAFC championships and amassed a 52-4-3 winning record. When the AAFC folded after the 1949 season, many insisted a major reason was the Browns' dominance that eliminated any viable competition.

The AAFC-NFL settlement called for the Browns, San Francisco 49ers and Baltimore Colts to join the NFL. Many NFL diehards, still not convinced the Browns were for real, expected Cleveland to fail badly when they played against the established NFL teams. But the Browns quickly proved their domination was no fluke by opening the 1950 season with a stunning 35-10 victory over the defending NFL champion Philadelphia Eagles. Cleveland then won the NFL Eastern Conference championship for six straight years from 1950 to 1955 and NFL titles in 1950, 1954 and 1955.

The Browns won another divisional title in 1957, a year that saw the great running back from Syracuse, Jim Brown, join the team. In his nine-season career, Jim Brown rushed for 12,312 yards, a lifetime record that stood for more than 20 years.

The Paul Brown era ended after the 1962 season and he was replaced by a former assistant, Blanton Collier. Collier gave the Browns their last NFL championship in 1964, when they defeated the Baltimore Colts, 27-0.

In 1961, Arthur B. Modell purchased the Browns for a then-unheard-of price of $4 million. From the start, he was recognized as one of the NFL's more progressive leaders. But Modell stunned the pro football world in 1995 when he announced that he would transfer his Cleveland franchise to Baltimore to begin play in 1996.

Determined to keep the team in Cleveland, Browns fans and Cleveland city officials orchestrated an unprecedented grass-roots campaign to block the move. The NFL quickly responded and, working with city officials, developed a unique solution that not only provided for a new state-of-the-art stadium, but guaranteed the return of pro football to Cleveland by no later than 1999. Additionally, Art Modell agreed to relinquish the "Browns" name, colors and team history to the new owner of the suspended franchise.