The Pittsburgh Steelers were founded by Arthur J. Rooney on July 8, 1933. Now the seventh-oldest franchise in the NFL, the Pittsburgh team was known as the Pirates until 1940. The Steelers struggled for their first 40 years without winning a championship of any kind until they won the AFC Central division title in 1972. Two years later, the entire sports world cheered when Art Rooney, one of world's most popular sports figures, received the Vince Lombardi Trophy after the Steelers' victory in Super Bowl IX. 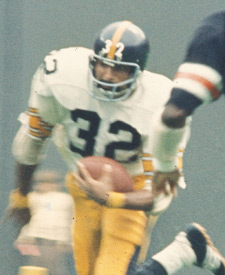 After so many years of frustration, the 1970s Steelers began one of the most incredible streaks in sports history when they earned eight consecutive playoff berths, seven AFC Central titles and four AFC championships from 1972 to 1979. The Steelers became the first team to win four Super Bowls and the only team to win back-to-back Super Bowls twice. The team of the decade of the 1970s became the first AFC team to win its division 10 times since the NFL's 1970 merger.

The list of Pittsburgh Steelers heroes of the 1970s is long but it begins with Head Coach Chuck Noll, who took control of the team in 1969. Such stars as defensive tackle Joe Greene, linebackers Jack Ham and Jack Lambert, quarterback Terry Bradshaw, cornerback Mel Blount and running back Franco Harris were the backbone of a team that many insist was the finest ever in pro football. All, including Noll, were accorded membership in the Pro Football Hall of Fame in their first years of eligibility.

Pittsburgh's success in the 1970s was the antithesis of the Steelers' experiences in their early years. The Pittsburgh eleven won only 22 games its first seven seasons. Rooney, seeking a way to make ends meet, often took his team from Forbes Field to such neutral cities as Johnstown and Latrobe in Pennsylvania, Youngstown, Louisville and New Orleans so as to avoid competition with baseball and college football in Pittsburgh. Through it all, Rooney never wavered in his determination to make pro football successful in his city.

In 1938, Rooney made Colorado All-America Byron "Whizzer" White the NFL's first "big money" player with a $15,800 contract. The 1942 Steelers, boosted by the NFL-leading rushing of rookie Bill Dudley, enjoyed their first winning season. With rosters depleted by the manpower shortage of World War II, Rooney merged the Steelers with the Eagles (Phil-Pitt) in 1943 and the Cardinals (Card-Pitt) in 1944. Coach Jock Sutherland led the Steelers to a first-place tie with the Philadelphia Eagles in 1947 but they lost their first postseason game ever to the Eagles, 21-0.

From 1957 to 1963, the Steelers, coached by Buddy Parker and with quarterback Bobby Layne, defensive tackle Ernie Stautner and running back John Henry Johnson playing key roles, were legitimate divisional championship contenders. But the "dynasty years" that coincided with the move to the AFC at the time of AFL-NFL merger, forever brightening Pittsburgh Steelers history, were still a decade away. The Steelers became the third team to win five Super Bowls after they defeated the Seattle Seahawks in Super Bowl XL. The 2005 wild-card Steelers, led by coach Bill Cowher, also became the first wild-card team in history to win three playoff road games and the Super Bowl.

Following the 2006 season, Cowher resigned and was replaced by Mike Tomlin, who in his second season led the team to victory in Super Bowl XLIII. The win marked their sixth championship in franchise history as the Steelers became the first team to win six Super Bowls.