1933-1939 Pittsburgh Pirates, 1940-present Pittsburgh Steelers, 1943 Phil-Pitt, 1944 Card-Pitt First known as the Pirates, the team changed its nickname to Steelers in 1940.  The franchise struggled for its first 40 years but made up for those tribulations in the 1970s.  In one of the most famous streaks in all of sports, the Steelers dominated the NFL during that decade.  Pittsburgh advanced to the playoffs eight straight seasons and won four Super Bowl championships in a six-year span.  The team added a record-tying fifth Super Bowl crown in the 2005 season and then in the 2008 season became the first team ever to win six Super Bowls. 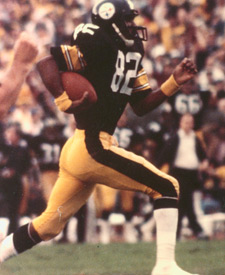 For a complete look at the Steelers history, visit the team website>>>