"I’ve taken enough beatings for one man. Not that I couldn’t take some more. It’s not fat nor age that’s driving me out…I’ve just had enough shoving and kicking around.” 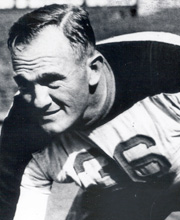 Hubbard played college football at two relatively small schools, Centenary College and Geneva College. But, when he turned pro, he went to the game’s biggest city, New York. The Giants, however, were well stocked at the tackle position, so the big man from the small schools was moved to the end position on offense and linebacker on defense. For the next two years, 1927 and 1928, the Giants teamed Cal with another future Hall of Fame lineman, Steve Owen.

The addition of big Cal made a good Giants defense great. New York posted 10 shutouts in 13 games in 1927 and allowed only 20 points for the season while winning their first NFL title. Hubbard earned all-league acclaim both seasons with New York.

In 1929, at his request, Cal was traded to Green Bay where he liked the small town atmosphere. Packers’ coach Earl (Curly) Lambeau was building a championship organization in Green Bay. Lambeau moved the versatile Hubbard back to the tackle spot. The Packers won NFL championships three straight years – 1929, 1930, and 1931. Cal enjoyed his best years with the Packers from 1929-1933 and 1935. During that time he earned first-team all-league honors as a guard in 1929 and at tackle in 1931, 1932, and 1933.

During the summers in Green Bay, Hubbard began umpiring baseball games. In 1936, he began a new career as an American League umpire. He became almost as famous as a baseball umpire as he had been as a football player. In 1958 he was appointed umpire-in-chief of the American League. Hubbard is the only person to be enshrined in both the Baseball and Pro Football Hall of Fames. 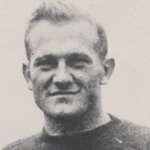 Drafted: Hubbard played prior to the NFL draft being implemented.

Mr. Chairman, honored members of the Football Hall of Fame, distinguished guests, ladies and gentlemen. With the National Baseball Hall of Fame and Museum extend our greetings, best wishes, and congratulations to all of you and especially to those who have worked so hard to build this magnificent National Professional Football Hall of Fame. It is a great pleasure to be with you and I have been honored in being asked to present to you a longtime friend who has won fame on the baseball diamond as well as on the football field. Cal Hubbard was born in Missouri and when the time came for college, he reported unsought and unannounced at Centenary College, Shreveport, Louisiana where he played football under Bo McMillian.

When McMillan transferred to Geneva College in Pennsylvania Cal went along and in 1926 was a member of the Geneva team that upset mighty Harvard. He was an All-American end at Geneva. Following graduation Cal played with the New York Giants then with the Green Bay Packers then back to the Giants for his final year in 1936. He played in the league 10 years and was all league end or all league tackle during these years. According to Steve Owen it was Cal who revolutionized defensive play. The seven-man line was the accented defense until the restless Cal discovered he was missing too much fun and tackles by staying anchored in the one spot in the scrimmage line. Because he was so fast he was able to stay back a few years and either plug up the hole he had vacated or make tackles on the other side of the line as well.

Thus, did he become the first roving backer up. Steve also tells how Cal would occasionally station himself as a flanking end and hurl his 260 pounds at the enemy line spilling the opposition like bowling pins. The rules committee finally stopped this devise by prohibiting his start. They were the only lads powerful enough to check him. Cal left football for baseball and became an American league umpire in 1936. He has been supervisor of umpires since 1954. Cal, I deem this a rare privilege and a great honor to present to you this replica of the bust which is emblematic of your election at the National Professional Football Hall of Fame. May you have many years of happiness and good health in which to enjoy the honor which has come to you and which has come to you and which you have so richly deserved. Thank you.

Thank you, Paul, Bob, distinguished guests, ladies and gentlemen. I really am in fast company today and I don't know anything I can say only that I am proud and honored to be here and to be one of this gang that is being inducted today. It certainly is an honor and I'd like to take this opportunity to thank everyone who had anything to do with me being here today. Thank you very much, I’m very proud to be here.