"I had a lot of pleasure out of every single championship. It’s just like having a baby—it takes a lot out of you." 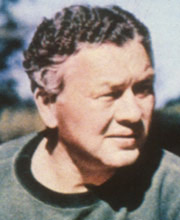 Earl "Curly” Lambeau founded the Green Bay Packers in 1919 and was the team's first playing star and its coach for 31 years. More than any other person, he is responsible for the existence today of the Packers' unique small-town franchise. Curly played fullback as a Notre Dame freshman in 1918 before an illness forced him to leave school.

Back in Green Bay, he was offered $250 a month to work for the Indian Packing Company, which, a year later, organized a football team called the "Packers." Lambeau became the team's coach and playing captain. Lambeau was the first pass-minded coach in the NFL and his teams were like their leader, impatient and explosive. An excellent passer in his own right, Curly flew in the face of common practice.

Despite rules that made it difficult to use the forward pass, Lambeau’s Packers were a team whose main offensive weapon was the pass – at any time, on any down, from anywhere on the field. With his vaunted passing attack, he led the Packers to championships in 1929, 1930, and 1931. After signing future Hall of Fame receiver Don Hutson in 1935, they won three more titles.

So advanced were Lambeau’s coaching theories and Hutson’s abilities that many of Hutson’s records stood for four decades or more. After he retired as a player, Curly replaced himself with future Hall of Fame quarterback, Arnie Herber and later Cecil lsbell, and the Packers remained a powerhouse for almost three decades.

A sometimes-hotheaded disciplinarian, Lambeau always got the most out of his players. Tackle Cal Hubbard, guard Mike Michalske, and halfback Johnny “Blood” McNally, were fine players who enjoyed Hall of Fame careers under Lambeau. Lambeau resigned from the Packers following the 1949 season and later coached the Chicago Cardinals and Washington Redskins. For many years his 229 career victories ranked second only to George Halas.

I thank you Bob. Ladies and gentlemen, I deem it a real privilege and honor to participate in the induction to the National Football Hall of Fame my high school coach, my advisor, my friend, Earl Curly Lambeau. Curly Lambeau like George Halas holds many tickets to the Hall of Fame: player, or coach, or founder. He game to America it’s most colorful team, the Green Bay Packers. When he put together the big team in the little town in 1919 Curly Lambeau should have been back at Notre Dame as George Gipp' s running mate. Curly Lambeau doesn't claim to be the father of the forward pass but he certainly gave it a happy home up there in Green Bay, Wisconsin. He taught the Packers and showed the world what could be done with it. His pass minded Packers won six World Championships including three in a row for an all-time record. His thirty-two consecutive years as head coach has no near second from the past, no near threat in the future. Even in retirement he breaks coaching records, for today three of the men that he coached are being inducted into the Hall of Fame, namely Johnny Blood, Cal Hubbard, and Don Hutson. The fame that the Green Bay Packers have today are directly attributed to Curly Lambeau because if Curly Lambeau had been raised in any other city you wouldn't have the Green Bay Packers today. Curly.

Thanks very much Jimmy. I am deeply grateful and very happy to be honored here today. Forty-one years ago, I came to Canton to get a franchise for Green Bay, Wisconsin. The franchise was issued by Joe Carr at that time and it cost fifty dollars, and the last time I looked the Packers are still in the League. Thank you.