"I liked it the way I played it. You went the full 60 minutes...We went from September to January and from Maine to Texas to the Pacific coast. In all we played 29 games and we had only 16 men on the squad. If the coach took a man out of the game for a substitution, he got mad. That’s how much we loved it.” 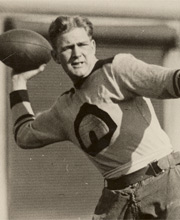 Of all the records in the history of the National Football League, the one that has survived the longest was set on November 28, 1929, when Chicago Cardinals fullback Ernie Nevers, scored every one of his team’s points (six touchdowns and four extra point conversions) in a 40-6 rout of the Chicago Bears.

The next week, the former Stanford University star again scored all his team’s points for a two-game total of 59 solo points. At Stanford, Nevers had gained gridiron fame when he courageously led the Indians against Notre Dame in the 1925 Rose Bowl game. Playing on what amounted to two very sore ankles, both of which were broken earlier in the season, Nevers rushed for 114 yards as Stanford lost to the superior Irish, 27-10.

Stanford coach, Pop Warner once called him “the football player without a fault” and compared him favorably to another player he coached, the legendary Jim Thorpe. Like Thorpe, when it came to football, Nevers could do everything exceptionally well, run, pass, kick, call signals, and play rock hard defense.

After he finished his Stanford career, Nevers signed pro basketball and baseball contracts and, in fact was destined to throw two homerun pitches to Babe Ruth in his historic 60-home run season in 1927. But pro football also beckoned. In 1926, Nevers turned pro with the NFL’s Duluth Eskimos.

The Eskimos were a traveling team. That season the team crossed the country playing 29 games, 28 of them on the road, against league and non-league opponents. Nevers reportedly played all but 29 of a possible 1,740 minutes.

Injuries forced Ernie to sit out the entire 1928 season, but he returned as the do-everything man for the Cardinals in 1929. In both 1930 and 1931, he was also the playing coach of the Cardinals. Nevers earned All-NFL honors each of his five pro seasons.

Ladies and gentlemen, it is my distinct pleasure to say a few words about Ernie Nevers. He is Americas all-time one-man team. Few clubs have scored as many points in one game against the Bears, and why they pick on George I don't know, as Ernie Nevers did alone, forty points. At Stanford coach Pop Warner compared him favorably to Jim Thorpe and described Ernie Nevers as the football player without a fault. Ernie Nevers was all things to all football. He did his team's passing, punting, place kicking and almost all the ball carrying. He returned punts and kickoffs, he called signals, and was the captain and in time the coach. His Duluth Eskimos played twenty-nine games in one season and he missed only twenty-seven minutes, a difficult record for a mere spectator to attach. Ernie Nevers is now a public relations consultant and lives in Tiberan, California. A great player, a great man, and fine friend, Ernie Nevers.

Thank you, Elmer, Bob, ladies and gentlemen. This is indeed a great honor and a great privilege to be here in Canton today. It's even a greater honor to have been included among such a great array of fine football players and great competitors. I played against many of these boys and played with some of them. I would have much rather played with Nagurski, it would have been much easier. And incidentally, Elmer, the best passing combination in colligate football is still Nevers to Layden. I have had many great thrills in football and in sports and in the celebrations after. Today as the automobiles took us down main street and I saw those great numbers of people I know now why Canton should have this great Hall of Fame - Thank you very much.