"Running is like driving a car. When you drive, you’re looking quite a ways down the street. The things that are close you take care of automatically with reflex action.” 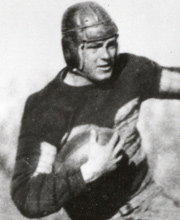 Dutch Clark’s story doesn’t fit the ordinary picture of an all-time great. In 1929, he became the first Colorado College football star to be named All-America, yet he didn’t play pro football until almost two years after he graduated, when he joined the Portsmouth Spartans for the 1931 season.

He retired from the pro game after two All-Pro seasons to become head coach at the tiny Colorado School of Mines. However, Clark returned to pro football in 1934 rejoining his team, which by then had been sold and had become the Detroit Lions. For the next five years, Clark, from his tailback position, was the general in Detroit's famed infantry attack that in 1936 set a team rushing record that stood for 36 years.

He was called the quarterback because he called the plays. A true triple-threat back, Dutch consistently finished among the leaders in rushing and once completed 53.5 percent of his passes in a season when the league average was just 36.5 percent. He also led the league in scoring three times, kicked field goals and extra points and, is generally considered the last of the great drop kickers.

The versatile Clark was All-NFL six of the seven seasons he played. Although a great athlete, Dutch was not particularly fast and had such poor eyesight he had trouble seeing his receivers. According to teammates, though, he had the uncanny knack of being in the right place at the right time. Furthermore his teammates swore that no one could follow blockers as well as Dutch.

Humble, Clark was always conscious of his role as team leader. So unassuming, he sometimes avoided calling plays directed his way for fear of hogging the limelight. “If Dutch stepped on the field with Red Grange, Jim Thorpe, and George Gipp,” a rival coach once said, “Dutch would be the general.” 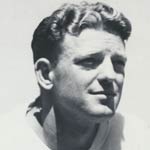 Drafted: Clark played prior to the NFL Draft being implemented.

Bob Considine, those we honor and those who are here to pay honor. Mine is the happy privilege of speaking a word for a man we in Michigan are proud to claim, it’s Dutch Clark. Dutch Clark brought new dread to the term triple, and old black magic to ball handling. His all around brilliance at tiny Colorado College tucked away in the Rockies put him on the All-American but there is considerable doubt among the men in the big colleges as to the wisdom of that selection so Dutch Clark came down from the mountains to mingle with the pros and very quickly scaled new peaks or leadership and versatility. In the open field his balance was unbelievable, his changes of pace and direction exciting. Last really of the drop kickers. He continued to score even while the ball was being shaped to an impossible point, Tut Shore notwithstanding.

As a field marshall he could get troops to do things things that even the troops were surprised when they discovered. He quarterbacked world championship teams at both Portsmouth and Detroit and went on to a great coaching record, but most of all we in Michigan hail him as an extremely fine example of a good citizen.

Thank you, Senator Hart, ladies and gentlemen, and honored guests. This is the most wonderful thing that ever happened to me and to be able to be a part of these ceremonies here today in Canton and things that I’ll cherish the rest of my life, and for those ,who are responsible, for coaches, and players, and sport writers, I shall be forever grateful. Thank you.