"Money did not mean that much to me. I had fun playing football.” 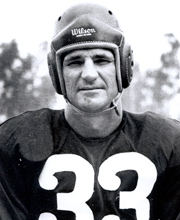 Sammy Baugh arrived on the pro football scene in 1937, the same year the Redskins moved to Washington from Boston. The Texas Christian star was the team’s first round pick that year. Over the next 16 seasons “Slingin’ Sammy” not only helped establish the pro game in the nation’s capital, he also was a major influence in the offensive revolution that occurred in the late 1930s and early 1940s.

When Baugh first started with the Redskins pro football was largely a grind-it-out ground game. The forward pass was something to be used with caution, and never inside your 30-yard line, except in desperate situations. By the time Baugh was through, the forward pass was a primary offensive weapon. Obviously, such a change could not be totally brought about by one individual. But Baugh was the catalyst that changed the game. No one had seen a passer who could throw with such accuracy.

Baugh started his pro career as a single wing tailback and didn't make the switch to the T-formation until 1944. He won a record-setting six NFL passing titles and earned first-team All-NFL honors seven times in his career. Sammy also led the NFL in punting four straight years from 1940 through 1943. Extremely versatile, he led the NFL in passing, pass interceptions, and punting in 1943.

One of his best single performances came on “Sammy Baugh Day” in 1947 when he passed for 355 yards and 6 touchdowns against the Chicago Cardinals, that season’s eventual champions. Baugh, although highly competitive, was still comparatively easy-going and never lost his sense of humor. When the Chicago Bears defeated the Redskins, 73-0, in the famous 1940 NFL title battle, a Redskins end dropped a touchdown pass in the end zone. Reporters asked Baugh if the outcome would have been different had the pass been caught. "Yeah," Baugh answered, "It would have made it 73-7." 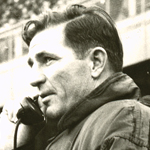 Harry Stuhldreher (presenter):
Thank you Bob (Consadine, emcee), distinguished guests, ladies and gentlemen. It was mentioned a few moments ago the older we get the greater we were. You will note now that that applies to me and me only. Certainly it doesn’t fit these other gentlemen that were being honored here today and those that are honoring them. There greatness has gone on and will go on forever. When you take into account that these people have founded the game of professional football, saw it born and have seen it grow into its tremendous success today you have an idea of what it means to be able to rub shoulders with them on this occasion. It wasn’t easy. The first pro team was the Massillon Tigers in 1903. Their first game on September 3, 1903 they lost to Wooster College 7 to 0. Just imagine what the game has done since then all because of these people. You have no idea of the feeling I have in being able to help honor, help induct a great quarterback Sammy Baugh to the National Football Hall of Fame. All of us who have had a close association with him have marveled at his tremendous exploits. He was the originator, the founder of the flying circus found in the Southwestern part of the United States at Texas Christian University. You know he had his spring practices, his foundation work as a young fella a rancher down in that country, not only was he a bronco buster but he was a roper thrower as well. He evidently employed this same technique in having done such a tremendous job in the passing game. He holds I guess near the all time record in having played in the National League, Washington Redskins for sixteen years. When you take in account that he is one of the few sixty minute men both offense and defense that happened to have played and is still around, that is really something. You are aware of this record in throwing and in kicking and all of that sort of thing but he has told me the record that stands out in his mind more than any which brings out the one platoon system is his pass interception record which is something that he is very, very fond of and that is the test of greatness in any person when he talks about something that didn’t score a touchdown. May be led up to one but didn’t actually score one as being something that he is so pleased about. So I take this great honor and I consider it so and I want to thank all of those responsible for it from the bottom of my heart for being permitted to pay this tribute to a great name in all football, Sammy Baugh. 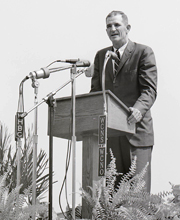 Thank you Harry. I feel as the other men on the program who have been up here. I’m very honored to be inducted into the Pro Football’s Hall of Fame. But to me the people who should be honored are the owners who stayed with it back in those days when they weren’t making money, losing money with pro teams. They still loved the game and thought enough of it to stay there and lose their money until the game became what it is today. A player didn’t have too much to lose. When you start putting your own money up and not having anything in return friend, you’ve got a little courage then. To me this is a day that I’d like to pay my respects to one of the finest men I’ve ever been in contact with, Mr. George Preston Marshall, President of the Washington Redskins. I had the privilege of playing for his team for sixteen years. I learned to respect Mr. Marshall. I’ve learned to love Mr. Marshall. I’m very sad about finding out that he is ill in Georgetown Hospital there in Washington D.C. I know that everyone in pro football will wish him the best and hope for a fast recovery. To you people who are responsible for me being here today I want to say thank you. I’ve had the honor of playing with some great football players. I’ll never forget those good lines that were in front of me and those good pass receivers I had the opportunity of throwing to. Thank you very much.