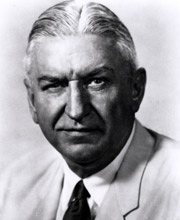 George Preston Marshall was operating a laundry business in Washington, D.C., when, in 1932, he made the fateful decision to become part owner of the new Boston Braves franchise in the National Football League.

His three partners dropped out when the Braves' first-season losses reached $46,000 but Marshall stayed to contribute to pro football in a unique and most valuable way. Renamed the Redskins in 1933 and moved to Washington in 1937, Marshall's teams, particularly in the 1936-45 decade, were very successful. They won NFL championships in 1937 and 1942 and divisional titles four other times during that period.

But as successful as Marshall's teams were, the flamboyant owner left his biggest mark in areas not directly associated with the team on the field. In the nation’s capital, Marshall organized the Redskins marching band and spectacular halftime shows, introduced cheerleaders, began a radio network that carried games throughout the South, and led thousands of supporters on pilgrimages to rival cities.

The energetic leader was also a force in improving the playing rules to open up the game and make it more crowd-pleasing. He championed the decision in 1933 to split the NFL into two divisions, with a playoff game to determine the title, and the liberalization of the forward pass rule. Marshall was totally involved in all aspects of his team’s operation and endured his share of criticism for not integrating his team until being forced to do so in 1962.

At his funeral in 1969, then-NFL Commissioner Pete Rozelle summed up the master showman's unusual gift to the NFL. "Mr. Marshall was an outspoken foe of the status quo when most were content with it,” he said. “We are all beneficiaries of what his dynamic personality helped shape over more than three decades."

I’m highly honored to be here today to participate in this ceremony and especially since it involves George Marshall. George Marshall’s contributions to National Football is too numerous to mention here. I could talk for an hour and I'm sure I couldn't cover all of them. To make it short I think he’s one of the greatest men that ever was connected with National Football.

My name since nobody introduced me is Milton King. I've been associated with Marshall ever since the inception of pro football. I might say that he's a better negotiator than Curly Lambeau because I was with him when we got the franchise for the Redskins from Joe Carr and we only paid twenty-five dollars for it. I am really honored to be here to accept this well-deserved reward for George. He's lived and died football. He's now confined to a hospital in his sick bed and he sends greetings to· everyone. I know that this would have been the crowning achievement of his life to which he has devoted so much time. His long and faithful service to the National Football League is well illustrated by his induction into the Hall of Fame. No man deserves it more. Thank you very kindly.