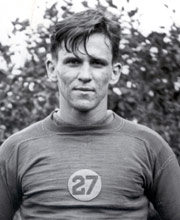 John McNally still had a year of college eligibility remaining when he decided to take a shot at pro football. To protect his eligibility, he needed an alias, a common practice in the 1920s. He and a friend passed a theater where the movie, Blood and Sand, was playing. Suddenly, McNally exclaimed to his friend: "That's it. You be Sand. I'll be Blood." So "Johnny Blood" it was, through 14 seasons in the NFL.

At 6-1 and 188-pound “Blood” was unbelievably fast, a superb running back and possibly the finest receiver in the National Football League at that time. He could throw passes and punt with the best.

On defense he was a ball hawk and a deadly tackler. He played on five NFL teams in 14 seasons but his best years came with the Green Bay Packers, with whom he was a major contributor to four championship teams in 1929, 1930, 1931, and 1936.

His off-the-field antics, however, constantly drew attention away from his exceptional playing skills. A talented youngster, Johnny graduated from high school at 14, an age when he was small and immature and could not compete athletically.

At St John's College, however, he began to grow and his natural athletic talents burst into full bloom. He was the basketball team captain and a letter winner in three other sports – football, baseball and track – in his junior year.

Some say McNally clung so fiercely to boyhood he that never grew up, at least not until after his pro football days which ended when he was coach with the 1939 Pittsburgh Pirates. He didn't marry until he was in his mid-forties and it was his wife Marguerite, who described him most accurately. "'Even when Johnny does the expected," she said, "he does it in an unexpected way."

Thank you, Mr. Considine. I'm very grateful for the privilege of being here in the presence of my peers and of presenting to you my good friend John Blood McNally. John has devoted a good many year of his life to the game of football including fifteen wonderful years in the National Football League. Not only was John a magnificent player and a brilliant entertainer but he had that rarest of all qualities, namely giving his greatest performances when greatest was required. This of course, is the Hallmark historically of the great athlete and it is also one of the major tests which time applies to the deeds of men. John, you and your performances have survived the test of time and they will continue to do so. I congratulate you as well as those who are responsible for this wonderful idea and this magnificent structure which now stands here in Canton, I give you John Blood McNally.

Thank you, Justice White and dear friend Byron. Dear friend when you stand in a place like this you must wonder to yourself how did I get here. The first thought that occurs to me is that you have to have great luck in order to compete in a game and in a league like this and to last long enough to get into this Hall of Fame. I had that kind of luck and I'm very thankful for it. But in addition to luck there’s a lot more involved. I can think of the courageous men who hired me, for instance there's Ole Hagsrud who took a chance and hired me. Curly Lambeau took a chance and hired me.

Art Rooney took a chance and hired me. Then I think of the coaches who trained me, Ernie Nevers has still got blonde hair and he took a chance or two, but it all turned out all right. Curly Lambeau u was a great coach.  Duke Osborn is here who coached up at Pottsville and he contributed to this and I thank them all. Of course, there are the fellows who are on the same teams like Don Hutson and Cal Hubbard who did so much and many other unnamed persons. But I certainly would not be here except for the creative imagination and the magnanimity of certain sports writers such as Oliver Kickly of the Milwaukee Journal and Art Daley of the New York Times and one other named Dick McCann who I think made the greatest contribution to the Hall of Fame in his imagination and his hard work, and all of the greatness that stands there in the Hall of Fame and I thank them. Now when you get here you can't get here at twenty-one, or thirty-one, or forty-one so you kind of qualify as a senior citizen. I think of some lines that struck me once the tumult and the shouting dies, the captains and the kings depart, still stands that ancient sacrifice a humble and contrite heart. I thank you all for this honor.