"My earning days in athletics are at an end and while sports have been my livelihood, I have really played for the love of competition.” 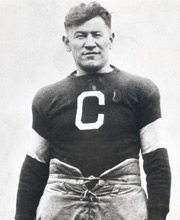 Just before the season-ending series between the Canton Bulldogs and the arch-rival Massillon Tigers in 1915, Bulldogs general manager Jack Cusack signed the most famous athlete of the age, Jim Thorpe, for the princely sum of $250 a game.

Thorpe was everything Cusack expected him to be – an exceptional talent and an unparalleled gate attraction. With Thorpe as star and coach, the Bulldogs claimed unofficial world championships in 1916, 1917, and 1919. His mere presence moved pro football a giant step forward in the public’s estimation.

In 1920, when the National Football League was organized, the charter members named Thorpe league president. While Thorpe's exploits tend to be exaggerated with the passing years, there is no question he was superb in every way. He could run with speed as well as bruising power. He could pass and catch passes with the best, punt long distances and kick field goals either by dropkick or placekick.

Often he would demonstrate his kicking prowess during halftimes by placekicking field goals from the 50-yard line, then turning and dropkicking through the opposite goal post. He blocked with authority and, on defense, was a bone-jarring tackler.

Of mixed French, Irish, and Sac and Fox Indian heritage, Thorpe was born in a one-room cabin in Oklahoma, but when he was sixteen his father sent him to the Carlisle Institute, a school for Indian youth. His Native-American name was Wa-Tho-Huk, meaning "Bright Path," something he was destined to follow in the sports world.

Excellent at every sport he tried, he gained his greatest fame by winning the decathlon and pentathlon events at the 1912 Olympics, only to have his medals taken away because he had once been paid to play minor-league baseball (the medals were restored posthumously in 1982). Although he played six seasons of major-league baseball, football always remained his favorite sport.

Mr. Toastmaster and Mr. President our friend Earl Schreiber and that boy who will have to do all of the work with Dick McCann, I certainly am pleased to be called upon to say something to this audience in Canton, Ohio. I came to this town just a little over fifty years ago as general superintendent of the Canton Sheet Steel Company. Five or six years later we built the Superior Sheet Steel Company out at Louisville just East of here. In listening to all of these remarks and all of the praises that are being given to these football players in which and with which I concur, I would like to take this audience and the people of Canton Ohio back to the earlier days before we had the funds to build such a beautiful edifice as the Canton or the Professional Football Hall of Fame.

I refer to men here who have done so much for this city, who have been engaged in so many different lines of business and endeavor. I would like to name some of the old-timers who made it possible for all of us to be here today. In looking over the group and thinking back of the days when I was connected with a great many of the institutions of the city, I see faces. of men like Henry Timken the founder and the head of the great Timken Company, and known to his friends in those days as Harry. Ed Longabaum, Dick Ben, Fred Griffiths, Charley Irwin, John O' Day, Herb Hoover, Charley Upham, Judge Harter, Ed Bender, Clarence Herbruck, and sportsman like Ollie Renkert, Mark Lathrop, Bill Steel, John Quinn, Tip Hiner, Frank Lippert, Lloyd Noaker, Jack Cusack, Ralph Hay, Les Higgins, and countless names like that came along to this community a little later. But nevertheless, they were great, great sports and greatly interested in this great game of football. These men who have founded and supported these institutions over these last fifty years that I know about, we owe a great debt to those kind of folks who as I said before have made it possible for us to be here at this great stadium, in this great building and this great Football Hall of Fame today. Earl Schreiber is one of those bossy kinds of folks.

He's president of the Hall of Fame and he bosses me around like he hands me his grip and that sort of thing which I must carry for him and then see that he gets the best lunches that are served over around the Youngstown district. Earl told me that if I took more than a minute and a half, he would ring the bell. But I would like to compliment Earl on the great, work that this boy has done, and I've known him since he caddied for me up at Congress Lake many, many years ago. I know that you have here for this institution a great man in the presidency and that is Earl Schreiber. I come now to the reason for my being here and I think it is perhaps, and I would say really is the greatest honor that's ever been thrust upon the shoulders of this "old mill man". I come here to talk about Jim Thorpe. This visit today brings Jim's name to mind immediately. To me he was the greatest football player that it has ever been my pleasure to know and one of the greatest athletes the world has ever produced.

Jim Thorpe - the record of his accomplishments in the field of sports is magnificent. His figure stands out as a beacon light to all young men aspiring to be great athletes and good citizens of these United States. Jim Thorpe was a great man, a keen competitor, who today gives me the greatest honor which has ever been bestowed on this "old mill mam.” Jim Thorpe was a friend. One who through the great power of influence has brought name, fame, and credit to this city of Canton, Ohio. It is with honor and respect that I present the citation and honorarium in the name of Jim Thorpe to another great friend highly respected and well-known personality in the field of football - Pete Calac, a man of honor and a gentleman of every respect. There are many other great athletes and great men who played with the Bulldogs. Of course, to me there is only one great name that stands out preeminently and that is the name of Jim Thorpe as the greatest of them all. Thank you very much.

Thank you, Henry Roemer, ladies and gentlemen. This is indeed a great day for me. I'm assigned here today to accept the award for my old teammate and friend, Jim Thorpe. Jim, I thought, was one of the greatest football players both college and professional football in his day. Today I know that he had that familiar grin on his face up in the happy hunting grounds and it's surely a great honor for me to accept this award in his honor. I thank you very much.