"Getting a winner, or building a winner, isn’t easy. It requires experience in the front office, long-range planning, shrewd promotion, careful appraisal of costs, and luck." 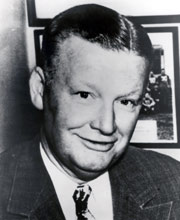 In 1925, it was apparent the National Football League needed a “showcase” franchise. League president Joe Carr went to New York to offer fight promoter Billy Gibson, a franchise. Gibson wasn't interested but he introduced Carr to a friend, Tim Mara. When Mara learned he could get a franchise for $500, he commented: "A New York franchise to operate anything ought to be worth $500."

The 1925 Giants went 8-4 and finished fourth in a 20-team league but they couldn't dent the fans' enthusiasm for college football. Undaunted, Mara tried to sign college superstar Red Grange only to find the Chicago Bears had beaten him to the punch. Still, Grange was important to Mara's future in football. When the Grange-led Bears played in New York’s Polo Grounds in December 1925, a sellout crowd saw the game and Mara netted a reported $143,000.

The future of pro football in New York was assured. Mara's euphoria was short-lived because, in 1926, Grange and his manager, C. C. Pyle, formed a new league with a New York franchise to compete with the Giants. Mara lost heavily, but the new league lost more and went out of business. The next year, the Giants went 11-1-1 and Tim had his first championship.

Mara had known hard times as a youngster so, when New York Mayor Jimmy Walker approached him in the depression year of 1930 about playing a charity exhibition game, he quickly agreed. The Giants defeated the Notre Dame All-Stars, 21-0, and Mara unselfishly turned over a check for $115,153 to the New York City Unemployment Fund.

In the 1940s, Mara again had to endure another inter-league war, this time with the All-America Football Conference. Once again, Mara won, strengthening what would become one of pro football’s most successful and storied franchises, and one of sport’s elite organizations.

Thank you, Bob. Tim Mara provided the great stage Pro Football had to have, New York City. Tim use to say that the New York Giants were founded by a combination of brute strength and ignorance. In his whimsical way he added that the players provided brute strength and he himself supplied the ignorance. The smiling Irishman was half right the players did supply the brute strength, but Tim was a smart, shrewd, courageous, and unswerving in the pursuit of his objective. Others had attempted to sell the game to the big city, but they had been gypsy-like. In 1925, when Timothy James Mara established the Giants, he had to build more than a team, he had to create fans. He set high standards, he insisted upon a major league operation, full time coaches and players, high caliber competition. He realized the league needed New York just as much as the city need the league, time and again he pulled them together. He left so many towered self-made monument, a football manned metropolis, a prospering league, and most important the greatest dynasty in all sport- The New York Giants – from father to sons and receiving for his father Tim Mara is Jack Mara.

Thank you, Arthur. Distinguished guests, ladies and gentlemen. This Sunday the New York Football Giants, and Mara family, start their thirty-ninth year in the National Football League and during this time we've had our shares of victories and defeats, our high spots and our low spots, but I don't think that anything can compare to the honor and the thrill that I fee l here now to accept this for my father. Thank you.