"I always used my strength in football. I liked to meet guys head-on when I was carrying the ball. Then I’d drop my shoulder, and catch him with that, and then brush him off with my arm. It worked -most of the time.” 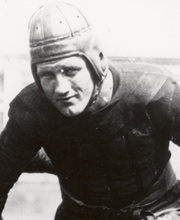 Chicago Bears fullback Bronko Nagurski was the symbol of power football during the 1930s. His performances took on legendary proportions. Many eyewitness observers insisted that for sheer brutal line-smashing, no one came close to Nagurski.

Never fancy, he just ran straight ahead, over and through the opposition. Although he is best remembered for his bull-like running, he had no peer as a blocker and his tackling was as effective as any the game has seen. He was the complete player.

At the University of Minnesota he played four positions and was named All-America at both fullback and tackle. With the Bears, his defensive play was as awesome as his offensive ball carrying.

The jump pass, in which he would fake a plunge, then step back a yard or two, jump and lob a pass to a waiting receiver was devastating. His jump pass to Red Grange was responsible for the key touchdown in the Bears’ 1932 victory over Portsmouth for the league title.

The next year, in the National Football League’s first official championship game, Bronko passed for two touchdowns, including the game-winning score. When Nagurski couldn’t get a raise to $6,500 in 1938, Nagurski retired to become a professional wrestler.

But in 1943, when the demands of World War II left the Bears short of manpower, he rejoined the team as a tackle. Late in the season, with Chicago trailing in a must-win game, he went back to the fullback position. The 35-year old Nagurski’s line plunges keyed a drive to the tying touchdown and then set up the winning score. A week later, in the 1943 NFL title game against the Washington Redskins, Bronko, - who was named a first- or second-team All-NFL in seven of his first eight seasons – ended his career by scoring the touchdown that put the Bears ahead to stay.

Thank you, Don. Ladies and gentlemen, honored guests. In the past I've been asked many times if I wouldn’t like to return to football. Well I could tell you right now if I had to face what I’ve got sitting behind me nothing could ever get me off the farm. I’ve had a lot of thrills in my life, but I can say sincerely that, to be so honored here today and with this fine group, this is a thrill of all thrills, and I want to thank all you people and all the writers who made this possible. Thank you.