"I've loved sports since I was old enough to cross a Chicago street by myself. I'm happy that I made pro football a career. It has been good to me in the material sense, but more important is that I have been associated with youth in all my years as a pro football coach and owner.” 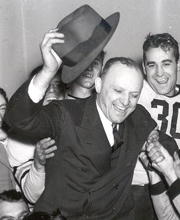 George Halas was associated with the Chicago Bears and the National Football League from their inception in 1920 until his death in 1983. He represented the Bears, originally known as the Decatur Staleys, at the NFL’s organizational meeting held in Canton, Ohio.

During his incredible career he filled the shoes of owner, manager, player, and promoter, and was an influential leader among the NFL’s ownership. It was, however, as a coach that he excelled and was best known. Although Halas coached his Bears for 40 seasons, he stepped away from the coaching ranks three times – 1930-1932, 1942-1945 (to serve in the military), and 1956-1957.

Each time a rejuvenated Halas returned to the sidelines to coach and won an NFL championship. Twice, in 1934 and 1942, Halas’ teams had undefeated regular-season records. His 318 regular-season wins and 324 total victories were long-standing NFL records until broken by Don Shula in 1993.

His Chicago Bears teams won six NFL titles, the first coming in 1921 after the Staleys moved to Chicago. George's Bears won three other divisional titles and finished second 15 times. Only six of Halas' 40 teams finished below the .500 mark.

As a coach, Halas was first in many ways: the first to hold daily practice sessions, to utilize films of opponents' games for study, to schedule a barnstorming tour, and to have his team's games broadcast on radio. With his players, George maintained tight control. Disobedience and insubordination were not tolerated. Along with Ralph Jones, his coach from 1930 through 1932, and consultant Clark Shaughnessy, Halas perfected the T-formation attack with the man in motion. It was this destructive force that propelled the Bears to their stunning 73-0 NFL title win over Washington in the 1940 NFL Championship Game and sent every other league team scurrying to copy the Halas system.

Mr. Chairman, and distinguished guests, heroes and friends of football, as a long time National League Football fan it is with great pride that I take part in honoring George Halas who enters Pro Football’s Hall of Fame portholes, a player coach, founder. This finest of all football lives here on the Illinois varsity, a half century ago. Left-end George Halas went on to Great Lakes to play on the historic 1919 Rose Bowl winner. He then organized the Staley Factory team in Decatur Illinois and entered it in the league he helped to organize. The league, the Bears, and George Halas have been here ever since. The factory team became the Chicago Bears, their principal product: Championships, 7 World Titles, twelve Western Division titles, two teams were unbeaten, untied, twice they won eighteen in a row, but not alone as a maker of mighty teams. George Halas has been one of Pro Football’s most dominant enduring forces, he has been the architect. So welcome to the Hall of Fame George Halas. It’s your player, coach, founder, come as you wish; we hail you as them all.

Thank you Governor Lawrence. Ladies and gentlemen. A few weeks ago a few of our grandchildren visited the Bears training camp and I was talking to them about this trip to Canton to participate in the Dedication of Pro Football’s Hall of Fame. Somehow the conversation got around to an earlier trip that I made to Canton some 43 years ago when we met in Ralph Hay' showroom-automobile showroom and founded the National Football League. I told them some of the informal aspects of that meeting and among them being that there was a lack of chairs and also that we had to sit on the running board of the car. That prompted my nine-year-old grandson to say what is a running board Grandpa? I would say the problem of answering that difficult question when my fourteen-year-old grandson said running boards are those things that you see on those funny old cars in that television series known as the “Untouchables".

That little incident demonstrated to me how things can change or disappear until a chance remark or a question - a child's question - stirs your memory. On my trip down here my memory was stirred back quite a few years when I think of the wonderful men who did so much to develop football in this area and through the country. Such fellas like the Nesser Brothers, Ralph Hay, Frank McNeil, Leo Lyons, Joe Carr of the Columbus Panhandles, who was  president of the National Football League from 1921 to 1939 some 18 years and you may be sure that some of those years were pretty tough. They were  the pioneers and this is the land were football set down its roots and here is the Hall of Fame were its history and traditions will be preserved and remembered. To all of you who have contributed so much to the realization of this Hall of Fame you people of Canton, Mr. Umstattd, and all the rest of you, let me say for all the Chicago Bears right from the original Staley’s in 1920 down to the 1963, just two heart felt words. Thank you.