"I knew what I wanted to do, and playing in the National Football League was it. So I really concentrated. I was all football, 24 hours a day.” 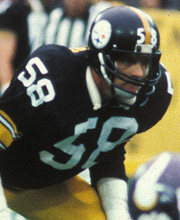 Jack Lambert was a two-year All-Mid America Conference linebacker at Kent State and a second-round draft selection of the Pittsburgh Steelers in 1974. The 6-4, 220-pound Lambert immediately took charge of his destiny by winning the starting middle linebacker assignment as a rookie and keeping it throughout his 11-year career in Pittsburgh that ended after the 1984 season.

He was soon recognized as the premier linebacker of his era. Lambert had all the necessary ingredients – intelligence, intensity, speed, quickness, range, durability – and he used them all to his best advantage. Even though he was the youngest starter on the Pittsburgh defensive unit, many felt that Lambert's presence was the final ingredient needed to turn that unit into a dominant one. Intimidating, he helped to shape and reinforce Pittsburgh’s famed “Steel Curtain.”

The team defensive captain for eight years, Lambert played in six AFC championship games and four Super Bowls. His interception late in the fourth quarter preserved Pittsburgh's fourth NFL title victory in Super Bowl XIV. During his career, he had 28 interceptions, which he returned 243 yards. In 1976, he recorded eight opponents' fumble recoveries and wound up with 17 during his 11-year tenure.

Lambert missed only six games because of injuries his first 10 years in the NFL but, in 1984, he suffered a severe toe injury, which limited his playing time to just eight games. He eventually was forced to retire at the end of the season. 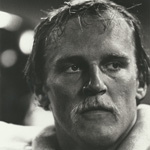 Drafted: 2nd round (46th player overall) in 1974 by Pittsburgh Steelers

Mr. Commissioner, Chairman Stu, presenters and inductees and football people of all ranks and stations, my particular chore, here today is a very easy one because I think my inductee fits this institution just like air to a football. Robert Service the great poet of the Yukon wrote, words, "there is a race of men that don't fit in,” and I think if he were in Stark County today I think he might change his words looking at these inductees because there is a race of men that fit right in.

Jack Lambert was born in neighboring Portage County right up the road, attending Crestwood High School, a quarterback no less, went to Kent State University and there from defensive end to middle linebacker where his football honors started to grow. He was drafted in 1974 in the second round of the Pittsburgh Steelers. His success was immediate. In his first year he was defensive rookie of the year, he was also an important contributor to the first of four Super Bowls that he was to obtain. He proceeded to add nine consecutive pro bowl appearances a record for NFL linebackers. In 1976 and 1979, he was voted the NFL I s defensive player of the year. He had 28 career regular season interceptions, had 1441 tackles, that is a lot of contact. He had complete mastery of his position and he was a great cover linebacker, especially as middle linebackers run, but these things are not as important as what all of you up there identify with Jack Lambert. He was one intense, tough football player. When he called a defense in a huddle there were 10 other defensive players that knew damn well that defense would work. Jack Lambert was exciting to watch, was a joy to coach but he was a lousy buck euchre player. He is now retired to the hills of Pennsylvania where he and his lovely wife, Lisa are raising two quarterbacks in dresses.

Ladies and gentlemen, I give you number 58 of the Pittsburgh Steelers the wheel behind the Steel curtain, Jack Lambert.

Thank you, thank you very much. Thank you, let's get this done. It goes without saying that to, be inducted into the Pro Football Hall of Fame is the ultimate honor that a football player can receive. It should also go without saying that one does not come to stand on these steps without the guidance, the direction and the support of others. In the short time 'that I am allotted today, I would like to start with my mother, Joyce. When I was growing up undoubtedly my biggest fan and supporter. I can't ever remember playing in an athletic event that my mother did not attend. I can still see my mom late at night after a football game, scrubbing and soaking the grass stains out of my pretty white football pants. Mom thought it was very important that her son have the whitest pants on the field. Thank you, mom, for all those special little things you did for me that I will never forget. My father, Jack ... I get my athletic ability and temperament from my father's side of the family. Most of the time we spent together was throwing the baseball back and forth or playing tackle football. Back before the days of NFL Properties, my dad had enjoyed buying football helmets and painting them the colors of the NFL teams. The helmet he chose to paint for his son at that time was the Pittsburgh Steeler helmet. Thank you, Dad.

Looking back to my days of playing football, my teammates and I won a championship in high school, college and the pros. In order to do that you must have exceptional talent. But you must also have great coaching. Throughout my entire football career, I was truly blessed with that. My high school head coach was Jerry Meyers. I went up to ask coach Myers if I could wear the number OO. He said ''Jack, that is a very special number, if you want 00 you have to be a very special player.'' And then he asked me if I had what it took and I couldn't answer that then, but I think I've answered that today. Thank you, Coach Meyers.

My head coach in college was Don James, the only Kent State coach to win a Mid-American championship and his record and the success he is still enjoying today out in Washington speaks for itself. Thank you, Coach James. And, of course, Chuck Knoll, who will one day be standing here on these very same steps to join Coach Landry and so many great coaches before him. And with all these fine head coaches, there was always one very -special assistant coach that for some reason or other took me under his wing and always, always spent the extra time with me that was needed. In high school it was Dean Ishieda, Dean is here today, thank you for coming Dean. In college it was Dennis Fitzgerald, and, in the pros, it was Bob Widenhofer who is now with the Detroit Lions. I could have chosen anyone of these men to be my presenter today because they were all so instrumental in my success, but I chose Coach Fitzgerald because I thought he, more than anyone else, taught me the techniques and the fundamentals I used throughout college and professional football. But maybe more importantly he took a raw talent and a raw toughness in me and refined it into a mental discipline a discipline that is necessary to excel. Thank you, Coach Fitzgerald.

I would also like to thank the NFL, an organization that enabled me to realize a boy hood dream, an organization that afforded me an opportunity to travel to Europe and Southeast Asia on USO tours with my good friend Billy Granholm ,and an organization that has given me so many cherished memories and friendships. On the day I retired from pro ball, I made this statement, "there is not an owner, or a team, or a coaching staff or a people in a city that I would rather have played for in the entire world.” The kindness that Arthur J. Rooney and his family have shown me and the kindness of the people in Pittsburgh have shown me over the years, are kindnesses that I can never repay. Five years later, I appreciate and stand by those words even more. How fortunate I was to play for Art Rooney and his family.

How fortunate to be associated with the entire organization. The front office people, the coaching staff, the medical staff, Dr. Best, Dr. Huber, Dr. Steele, the trainers headed by Ralph Berlin and Ralph Miley who did their best to stitch me up and piece me together for 11 years and the most important people in the organization the locker room and equipment men, Jackie Hart, Tony Parisi, Rodgers Freyvogel, Frankie and Mike. I was so fortunate to have played on some of the greatest teams of all time and arguably the greatest defense ever assembled. And finally, how fortunate I was to play for the Pittsburgh fans ... a proud and hardworking people who love their football and their players. If I could start my life all over again, I would be a professional football player and you damn well better believe I would be a Pittsburgh Steeler.

To my family, to my friends, to all my teammates from Crestwood and Kent State, to all of you fans out there who will never be in any Hall of Fame, at the risk of sounding a bit pretentious I give this day to you. This is your day and ·this is your Hall of fame. I would like my wife Lisa and my daughters Lauren and Elizabeth to stand. There ladies and gentlemen is my Hall of Fame. Thank you, God Bless.