"Cornerback was a challenging position to play, but I felt there was nobody I couldn’t cover. But there’s one thing for sure – you had to have nerves of steel to play cornerback.” 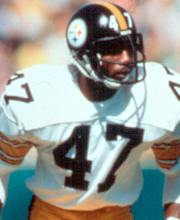 Mel Blount was the prototype cornerback of his era and a major reason why the Steelers were the dominant team of the National Football League in the 1970s. A third-round draft choice of the Pittsburgh Steelers in 1970, he had ideal size, speed, and quickness, plus the toughness and mental ability to adjust his coverage tactics to rule changes that favored receivers.

A Pro Scouts All-America as both a safety and cornerback at Southern University, Blount became a starter in the Steelers secondary beginning in 1972. That season, he didn’t allow a single touchdown. A fixture at right cornerback, Mel was equally effective playing either zone or man-to-man defense. Known for his rugged but clean style of play, his specialty was the “bump-and-run” pass defense. Because of his size and speed, he literally overpowered pass receivers.

Midway through his career, however, the rules were changed making such harassment of a receiver illegal. Blount, a native of Vidalia, Georgia, wound up his career with 57 interceptions which he returned for 736 yards and two touchdowns. He intercepted at least one pass in all 14 NFL seasons and led the league in interceptions with 11 in 1975. Blount also was used as a kickoff returner early in his career. He wound up with 36 returns for 911 yards and a 25.3-yard average. He also recovered 13 opponents' fumbles, two of which he returned for touchdowns.

Blount, who was named the NFL's most valuable defensive player in 1975 by the Associated Press, earned all-pro acclaim in 1975, 1976, 1977 and 1981. He also was a four-time All-AFC selection and played in five Pro Bowls. His fumble recovery in the 1979 AFC Championship Game led to the Steelers' winning touchdown in a 27-13 victory over the Houston Oilers. A season earlier in Super Bowl XIII, Blount's interception ignited a Pittsburgh drive that resulted in a go-ahead touchdown in a 35-31 victory over the Dallas Cowboys. He started in four Steelers' Super Bowl victories (IX, X, XIII, and XIV).

This is really a great day even the Lord is shining on us. My father really would have loved to be here with Mel and Terry to share the laughs, the fun, the Steelers of the 70s, the best. They were dedicated and enjoyed themselves. They loved the game. They all deserve to be here in Canton. Their accomplishment is unmatched, repeating and then winning four Super Bowls and then back to back Super Bowls is rare. Winning four in six years is unbelievable. With the character of the men of those teams, that was unique. Special people dedicated, committed to purpose, to victory to be the best. I want to congratulate Terry Bradshaw, the most successful quarterback that ever played the game and a Steeler. Art Shell, a great competitor and a Raider. And Willie Wood who we all marveled at, his abilities with the Packers in the 60s.

It is a special honor for me to present one of the outstanding people to ever play in the NFL. A person who has remarkable accomplishments of the field as well as on, dedicated to helping young people in difficulties by giving them a home. An inspiration to all, young and old, businessmen and athletes. Giving guidance to NFL players today. But it is his on-the-field activities that bring us to Canton today. After being drafted third by the Steelers in 1970, from Southern University, he went on to intercept 57 passes, recover 13 fumbles in 14 seasons. He played in 200 regular season games and played on four winning Super Bowls. A member of the team of the decade, the 70s. He went to the Pro Bowl five times with the NFL defensive player of the year in 1975. And even more spectacular; you all heard of famous Amos Alanzo Stagg, he was the great coach that the rules were written to stop, well Mel changed the rules in the NFL. He was so big and tough that they changed the bump and run rule to stop Mel from dominating receivers.

His appearance is dominating as you can see, but even with the new rules, he continued to defend this corner like no one else. Scouts say they don't even look for corners like him anymore because you don't get corners with his size or his speed or who can jump like him. One time my brother was working on a hot shot prospect who had a great vertical jump, Mel wondered through the stadium hall and as the kid was touching so high to make a mark and he bragged that that was the top mark. Mel in his street clothes jumped, marking a higher spot and when he landed, he said to the kid, “that is the Steeler mark."

And he has made many Steeler marks farther. It is truly a pleasure to present for his induction to the Pro Football Hall of Fame, one of the greatest players of all times, Mel Blount.

Thank you very much. Boy what a great weekend this has been. It is an awful long way from the cotton fields and tobacco fields of Vidalia, Georgia to the Hall of Fame here in Canton, Ohio.

I want to say that I am a very lucky man because I have had the opportunity to play for the greatest honor, played in front of the greatest fans and to play with some of the greatest athletes known to the history of the NFL. And when I retire, as luck would have it, I was blessed again to go to work for the Commissioner of the National Football League and I want to take a few minutes to thank the Commissioner for all the great things he has done for the National Football League and I want to thank him for giving me an opportunity to remain involved with the NFL, one of the greatest institutions in this country. To be involved and to work with the finest staff he has there in New York. And I just want him to know that all of us who love football, want to thank you Commissioner, for making football what it is, giving us an opportunity to play and make a living and football will continue but it will never be the same without Commissioner, Pete Rozelle.

It is also a great honor to be inducted into the Hall of Fame with not just great athletes, but great individuals. Men of great character. I want to tell all of you, I am so honored to be enshrined in a fraternity that very few men will ever get to be a part of. This is a great honor. It is a great opportunity for my family and young people throughout the country to see exactly what can happen when you are willing to pay the price and when you are willing to make a commitment and when you are willing to give it all you can. If anybody, if the odds were against anybody, they were against me. Being the youngest of 11 kids, brought up on a farm in Georgia, a family who lived and prayed and hoped that they would fed 11 kids off the land and out of 11 kids, seven of us were able to go to college because we had the kind of parents that America is thirsty for today, parents who are committed, parents who want to see and will instill in their kids that they strive to be the best. We have too many young people in this country that are drug attics, we have too many young people who are lazy to work. If there is anything we could do as professional athletes we must give our time, we must give our service to our young people and let them understand that they can make it and we need them because they are the greatest resources that this country has, our young people.

A lot of my colleagues said that Mel you will get up here and you'll break down. But I've cried enough, I've struggled enough because there is a struggle you will pay for anything that you will accomplish. For me this is an opportunity for me to get up and say exactly what we represent in the country as athletes. What we have done on the football field is history. What we will do from this stage on is yet to be seen. What I am trying to do with the Mel Blount Youth Home is set up a place for the kids that are less fortunate, can have a place to come, kids who have gotten in trouble for whatever reason, will have a place to come and get that second chance which we all have had to have at some point in our lives. And we have been able to do that in Vidalia, Georgia.

We got a good program; a successful program and the idea now is to expand and move to another area. Pittsburgh, of course, is the most logical place to go because of the service and because of the price that you have paid, the commitment you have had and the way you have turned the city around. But there is a community right outside of Pittsburgh that I want you to know about today. Buffalo Township in Washington County. The supervisors and the town people in that community for whatever reason with their racial attitudes, with their narrow-mindedness, cannot see exactly what it is about, to really try to reach out and help the young people. We don't need people in the public office who are holding people back. The Mel Blount Youth Home is going up in Buffalo Township, we will make it work, the community will be proud of it and I can tell you this, it will be an asset to that community and it will be an asset to our young people in this country because you don’t realize the number of young kids that are incarcerated for whatever reason, who are good kids that just need a second chance. So, I want to say to all of you here today, that the Hall of Fame, the National Football League, the Super Bowls all of those things are something that I cherish more than anything with the exception of my family.

I came from a beautiful family, a family that struggled in the deep south and instilled in their kids that you can do anything if you are willing to pay a price and you can be as good and you are just as good and it doesn't matter where you come from, it is where you are going that is what makes the difference between failure and success. To my lovely daughter, Shantel, I say I love you. To my beautiful daughter, Tanisia, I love you and to my son who is with the Atlanta Falcons, I wish you the best because this is a great opportunity to you to make a living and to be a part of a great institute like the NFL. To all of you, to the fans who have been so great. To the businesspeople at Pittsburgh, to the Rooney's all of you, I love you very much. God Bless you. Thank you very much.