"There’s far more to playing fullback than just running with the football. Everybody wants to run with the ball, that’s the quickest way to get the headlines and lot of newspaper space. But how many times does a back peel off a long run by himself? I’ll tell you – absolutely none.” 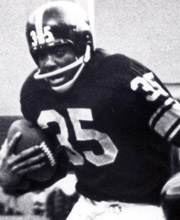 When he retired after the 1966 season, his 6,803 career rushing yards ranked him behind only Jim Brown, Jim Taylor, and Joe Perry as the top ground gainers of all time. Johnson also was an excellent pass receiver with 186 receptions for 1,478 yards. He scored 330 points on 55 touchdowns in his career.

A standout collegian at St. Mary's until that school discontinued football and then at Arizona State, John Henry was a 1953 second-round draft pick of the Steelers. He first opted to play in Canada but after one season at Calgary, he returned to the United States to start his NFL career with the 49ers. He was an immediate sensation, finishing second in the league in rushing with 681 yards and a 5.3-yard average.

For the next two years, he was an integral part of the "Million Dollar Backfield” that included future Hall of Famers Hugh McElhenny, Y. A. Tittle, and Perry. Johnson was traded to Detroit in 1957 and then to Pittsburgh in 1960.

It was with the Steelers that John Henry enjoyed his finest seasons. In both 1962 and 1964, he broke the 1,000-yard rushing barrier, the first Steeler to achieve that lofty level. It was with the Lions, however, that he participated in his only NFL title game, the 1957 contest that saw Detroit overwhelm the Cleveland Browns, 59-14. Johnson was a key figure in the Lions’ title drive that year and wound up as the club's leading rusher with 621 yards. Johnson was selected to play in the 1955, 1963, 1964, and 1965 Pro Bowl Games.

1957 NFL – Detroit Lions 59, Cleveland Browns 14
Johnson started at fullback for the Lions. He carried the ball eight times for 40 yards and had one reception for 16 yards. 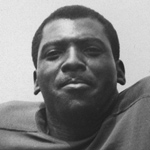 Drafted: 2nd round (18th overall) in 1953 by Pittsburgh Steelers

Played in the Canadian Football League in 1953. Negotiating rights were traded to San Francisco 49ers before the 1954 season.

Thank you. I would like to congratulate the enshrinees going into the Hall of Fame today. It is a special tribute that three of them, Lenny Dawson, John Henry Johnson and Joe Greene played for the Pittsburgh Steelers. I would like to congratulate all of the former inductees. They have all been great men, great players and have done much for the NFL. I am grateful that John Henry Johnson has asked me to be his receptor. That is quite an honor, one that I will certainly cherish all my life.

John, as a rookie, joined the great back field of the San Francisco 49ers of Y.A. Tittle, Joe Perry, and Hugh McElhenney who have preceded John into the Hall of Fame and it is a great honor for John and wonderful for the people who chose John to go into the Hall of Fame because he certainly deserves to be in the Hall of Fame. John was a full football player who is recognized as one of the all-time great blockers in football. However, John was a full football player. When he retired from the NFL, he was the 4th leading rusher in the NFL, gaining over 6800 yards. So, I again, would like to thank John for choosing me as his receptor and I present to you, a real, full National Football League, one of the greatest fullbacks in the history of our league, John Henry Johnson.

Before I get started, I have a confession to make. I don't think I have been this scared since I was being chased by Bob Gaines and Don Colo. Anyway, it has been a long wait, but I think it was worth it. I think it takes a little time to accept the fact that you finally have been selected to the Hall of Fame after waiting so many years. There is no man that worked any harder on my behalf than Mr. Rooney and the Rooney family. I would like to thank them for the hard work and the effort they put in there. I would also like to thank Chuck Heaton of the Cleveland Press for doing a tremendous job of working on my behalf.

Let's talk about football fora few minutes. When you think about it, millions of kids started playing football and at the same time, we dream about being here, but only a few make it. Being selected by the Old-Timers Committee you might think that that was some kind of consolation jesture. I don't think of it that way. I am proud to be picked as an old timer. Us old timers, like Bobby Layne, Marion Motley, Lipscomb, Perry and Tittle who made pro football the game that it is today. There are a lot of people in my life who deserve as much credit for me being here as I do. They are old timers too, but the lesson they taught me can only be learned and come from experienced people who have been around for a while. They were my junior high and high school coaches, Tom Cureton and Tony Neff. You know it is a funny thing, my football career started and ended in Pittsburgh, which is 3,000 miles apart. Back in Pittsburgh, California my high school coach Tom Cureton was a confidence builder. He gave me a lot of chances to play ball. He gave me the idea that I could accomplish a lot of things in sports if I wanted to and if I worked. T

hat was the secret, if I worked. Mr. Cureton was a stern, disciplinarian but he was the first coach that thought I had enough talent to be a decathlon man. Coach Neff was the same type. He was a stern disciplinarian and he gave me a lot of confidence. He told me I could accomplish anything I wanted if I worked hard. He gave me a lot of good references for colleges and I ended up going to Arizona State and St. Mary's College. I would like to thank those two schools for helping ne out and giving me the development that they did. Both men emphasized good graces, hard work and being part of a team and that would take you a long, long ways. I would like to say something about the principal I had in high school, Mr. Sphere and some of the teachers I had back in Pittsburgh High School. They were dedicated teachers, they helped me develop my confidence. I think what we need today is for those people to think more about those people around them in high school, the teachers and the coaches, listen to what they are telling you not only to keep your grades up but about staying away from drugs and the importance of hard work.

People make it to the Hall of Fame because they take their God given talent add that to what they have been taught by people with experience, the old timers ... they are the ones who know what it takes. Pete Constanza, Dorothy his wife, have been my friends and counselors for many years all the way through high school and junior high school and can you believe they are still doing it.

My mother died when I was real young and I lived with my brother and sister in-law all my young life, Mr. & Mrs. Melvin Simpson. They taught me appreciation and how to share. When I started playing pro football, I learned from the old timers that you have to play it without complaining sometimes ans those days it went both ways. Some of the greatest players of all times taught me these lessons. Bobby Layne was one of the greatest competitors I had ever seen. He taught me how to win. Bobby did not believe in losing. If we were playing pigeon to the line, he wanted to win it. I owe a lot to him and his widow, Sue and to his two sons. They were my dear friends. I think Bobby Layne liked me because I had the same attitude he had. We played hard all the time. We didn't want to lose; we didn't ask any questions and we didn't give any. I played in the famous green backfield when I started out with the San Francisco 49ers, Joe Perry, Hugh McElhenney and Y.A. Tittle.

I learned teamwork with those fellows. We were good because we worked together as a team. To them a good blocker was just as important as a good runner. I know because I did a lot of blocking for those guys and it made me feel good. My greatest moments in pro football was winning the championship in Detroit. The s Jn taught me never to quit and never to say die. We were behind in many, many occasions, but we ca.me back to win. Bobby Layne said throughout all those games that we were winners and believe it or not we did win. Old timers were driven by pride and not dollar signs. They looked at it as performance and not press clippings. After I left pro football, all these values really started to mean a lot to me. Working hard, never giving up, having confidence, this is what kept me going. I was confident that someday I would be here, on the other hand I thought I might be dead since it has taken so long.

I am real proud that I earned your respect. Earlier this year when more pension money was provided to the old timers, I think it was a good thing. It was a long time coming. But each one of them deserves all the help you can give them. They deserve all your respect you can give them. They earned it, they really earned it. I would like to say hello to another family of mine out here, Peggy and Jack Southern who I spent many happy years with who really gave me a lot. I got a family out here, my brothers, two daughters, a wife. I got a brother-in-law back there and his lovely family. I want to thank all of you. Leona is out here some place, I don't see her, oh there she is ... I would like to thank all of you for all the support you have given me, and, in many cases, it would have been really tough to make it without it. I want to say that respect is all I ever wanted and today I feel that I finally have that respect and I want to tell you it makes me feel damn good. If I left out alone, I hope you forgive me as I said I am a little nervous, so I want to say thank you.