"I look back now and I can see that the only advantage to being drafted high is financially. I think a player that comes up the way I did get a lot more out of the game. If my career ended today or tomorrow I don’t think I could say I got a bad deal. I have nothing bad to say about the game. I think it’s because of the fact that I came up the way I did. I feel I earned my job and that I’m justified where I am.” 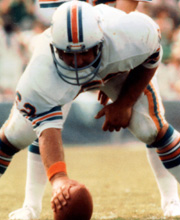 Jim Langer joined the Miami Dolphins as a free agent in 1970, stayed with the club for 10 years through the 1979 season and then wound up his career with the Minnesota Vikings in 1980 and 1981. In his decade with the Dolphins, Jim developed from an obscure substitute to one of the finest centers ever to play.

Langer was named first-team All-Pro four times and All-AFC five straight years from 1973 to 1977 and was also picked for the Pro Bowl six straight times. During that period, he started in three AFC championship games and Super Bowls VI, VII and VIII.

Many qualified observers insist that Langer was the most proficient performer on a talent laden offensive line that fueled Miami's vaunted ball-control offense. Jim played middle linebacker at South Dakota State before being signed by the Cleveland Browns as a free agent early in 1970, but was cut during training camp. Jim then latched on with the Dolphins.

For two years, he saw only limited action as a guard and a special teams player. But In 1972, he switched to center, won the starting job and wound up playing every offensive down in Miami's perfect season.

Hard working and quick, Langer was a compact, low-driving blocker who had the strength to stymie the bigger defensive linemen. At first, Jim snapped only on T-formation scrimmage plays but, after long practice in his own backyard, he started snapping on punts and placekicks in 1974. Langer also proved to be durable.

Continuing to play in spite of injuries, Jim saw service in 141 consecutive games from 1972 until a knee injury ended his Miami tenure with seven games left in the 1979 season. Early in the 1980 campaign, he was traded to the Vikings, with whom he played two more seasons. 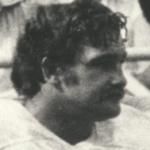 Drafted: Signed as a rookie free agent with Cleveland Browns

Double duty ... what a pleasure. In order to win on offense, you have to be strong up the middle. Our Dolphin teams of the 70s had that strength with Bob Griese at quarterback, Larry Csonka at fullback and Jim Langer at center. Jim was the anchor of our great offensive line. He was the combination of bis skills and leadership that enabled us to play exceptional ball control football. Jim made it the hard way. In 1970 he was signed as a free agent by the Cleveland Browns out of South Dakota State and then was released on the last cut. My offensive line coach, Monty Clarke, knew of Jim's potential and he talked me into picking him up off of waivers. Monty is here today, and I am sure he is very proud ... Monty.

Jim made our active roster in 1971 and in 1972 he won the starting job. He held onto that job until 1979 when a knee injury cut short his playing career. Jim was not only a six-time All-pro performer, he was durable. He played in 134 straight games during his career and holds the Dolphin team record of 117 consecutive assignments. In our perfect season of 1972, he played every down. One of the amazing statistics of that year in grading out his blocking, out of 500 blocking assignments, he needed help on only 3 plays to get the job done. He was the kind of guy you could rely on to get the job done. Our offensive line during the back to back Super Bowl years, made very few mental or physical errors and Jim was the leader up front.

He called all the blocking assignments and used his tremendous strength and quickness to not only become a power drive blocker on rushing plays, but also an excellent pass protector. Jim had a way of playing his best against the best in the biggest games. He always rose to the occasion. Having Jim as a player and being able to coach him was a distinct pleasure. Being here to present him to you today for induction into the Hall of Fame is an honor. It is a tribute that one of pro football's greatest centers should enter the Hall during his first year of eligibility. He got it done within the rules. He had very few holding calls and was the solid cornerstone of the great Dolphin teams of the 70s. He was our leader. I would like to present Jim Langer.

Thank you, Don. In case any of you are wondering what it is like on a football stadium floor when it is 140 degrees, you have been sitting in it and the skilled positions have used up a lot of our time, so Upshaw and I are going to try to get this back on track. And if you think I am nervous, I am scared to death.

In the fall of 1970, I began a career at Hiram College where the Cleveland Browns had training camp. It began with a lot of uncertainty and certainly a lot of humility. It’s about 17 years since then and my career has ended. I am certainly certain of a lot more things now, but I have more humility approaching this moment than I had coming into the league. This is a tremendous thing to have happen to an individual.

I have had a lot of people ask me how the Dolphins accomplished what they did and how did they tick. I would like to read you one sentence before I mention a few people who made it all possible and then I am going to turn it over to Mr. Maynard. This is Don Shula talking in the early 70s and I quote, "I feel you set a goal to be the best and then you work every waking hour of every day trying to achieve that goal. n "The ultimate goal is victory and if you refuse to work as hard as you possibly can towards that aim, then you are just cheating yourself. What we want to dedicate ourselves to is establishing a standard of excellence in the future just as the Packers did in the past. That is the challenge.” And ladies and gentlemen we believe that to a man for all the time I spent in Miami.

I played with a group of guys Monty Clarke called the mushrooms. Monty Clarke means more to me in many ways than I can express up here. He was followed by John Sandusky. But guys like Wayne Moore, Larry Little, Norm Evans, Mike Current, Ed Noman and my roommate of nine years, Bob Kuchenberg, well Kuch you better get ready. That is what this game is all about and as I sat at a luncheon with the likes of Hugh McElhenny, Night Train Lane and Gale Sayers and Ray Nitschke, it has still not occurred to me what has happened to this point, but it will.

And what I feel most thankful for is my family here to enjoy this with me. My mom is here and is tougher emotionally than Joe Greene, in fact she threatened him just the other day. And my wife of 19 years who used to go out in the backyard and catch snaps for me, trying to convince Don that I may make a snapper at some point. Lynn put in some tough years. As was expressed by Joe, it is a tough life, it is tough on a family. And to my children who are seeing not only what is happening in my case, but to the great individuals who have been enshrined here with me today and the people who have preceded me in the past. And to countless people we don't have time to mention. You know who you are, and you mean so very much to me. You don 1 t get to this podium by yourself. I have been very, very fortunate throughout my career and I will cherish this moment for the rest of my life. Thank you very much.