Awarded the National Football League's 27th franchise in 1974 with the first kickoff scheduled for 1976, owner Hugh Culverhouse, a successful Florida tax lawyer and broker, hired John McKay as the first coach of the Tampa Bay Buccaneers. McKay had achieved great success at the University of Southern California with four national championships in his 16 years and it was McKay who orchestrated the building process that led to the Buccaneers' stunning early success. 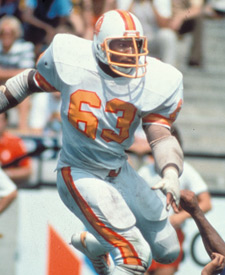 After losing a league-record 26 consecutive games, the Bucs broke into the win column at New Orleans on December 11, 1977. Two years later, Tampa Bay stunned the football world when it reached the 1979 NFC championship game in only its fourth season. The Bucs clinched the NFC Central title with a dramatic 3-0 win over Kansas City in a driving rainstorm and then defeated Philadelphia 24-17 in playoff action to advance to within one game of the Super Bowl. But in the NFC championship, the Los Angeles Rams prevailed with a hard-fought 9-0 victory.

One of the hallmarks of Tampa Bay's early success was an excellent defense led by Hall of Fame defensive end Lee Roy Selmon, who was the Bucs' first draft choice and the number one pick of the 1976 NFL draft. In his nine-season career, Selmon was named to the NFC Pro Bowl team six times and was selected as the NFL Defensive Player of the Year in 1979. Offensively, the 1979 Buccaneers were led by quarterback Doug Williams and running back Ricky Bell, who gained 1,263 yards. The Buccaneers reached the playoffs for the second time just two years later in 1981. They again won the NFC Central division championship with a 9-7 record. As was the case in 1979, it took a dramatic 20-17 final-week win over the Detroit Lions to clinch the title. Selmon on defense and Williams at quarterback were once again key players for the Buccaneers.

Although no divisional championships were awarded in the strike-shortened 1982 season, the Bucs qualified for postseason play for the third time in four seasons by winning five of their final six games. A first-round playoff loss to Dallas ended Tampa Bay's season.

McKay retired as coach following the 1984 season after nine years at the helm of the Buccaneers ship. In the years since McKay's departure, Leeman Bennett, Ray Perkins, Richard Williamson, Sam Wyche, and Tony Dungy all have served as the Tampa Bay head coach. With head coach Jon Gruden at the helm and young stars leading the way, the new-look Buccaneers captured their first NFL championship with a convincing 48-21 win in Super Bowl XXXVII.