A new "For Pete's Sake" blog appears each Thursday.

Today is like a holiday for any football fan. You don't have to be a crazed (and I say that in a complimentary way) draftnik to be excited about today. Parties are abundant as we prepare for the NFL's 76th Annual Draft. As you know tonight's first round is being televised live in primetime and then rounds 2 and 3 will go tomorrow night. The draft wraps up with the final four rounds on Saturday.

The 2011 NFL Draft takes place among the glitz and glamor of Manhattan with the proceedings located inside Radio City Music Hall. This year, for the first time, a former player will step to the podium to make the selection for their former team's second round pick. Among the NFL alum taking part in the announcement are 11 members of the Pro Football Hall of Fame including three of the newest enshrinees – Richard Dent, Marshall Faulk, and Shannon Sharpe. 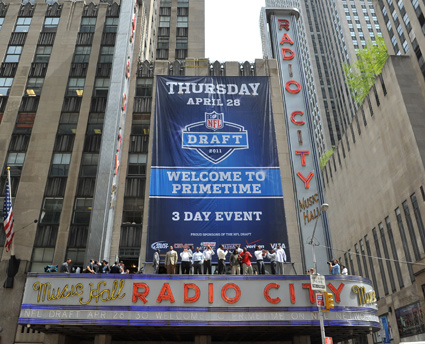 The Hall of Fame is also joining in the fun as we'll be on hand for team draft parties in Cleveland and Dallas tonight; Chicago on Friday and Saturday, and at FedEx Field in Washington all day Saturday.

The scene over the next few days is in stark contrast to what occurred inside a banquet room at the Ritz-Carlton in Philadelphia on the second weekend of February in 1936. Nine months earlier during a NFL owners meeting in Pittsburgh, the team owners accepted the provision, as presented by Bert Bell, whereby each NFL team was able to select a college player. The order was determined in inverse order of finish the prior season.

So after the meeting was called to order at 1:30 p.m. on Saturday, Feb. 8, 1936 and after a report presented by President Joe F. Carr, and after a review of the Treasurer's report was accepted, filed, and passed unanimously, the representatives from the nine NFL teams turned and faced a chalkboard.

Written on the board were the names of an estimated 90 college players. The process apparently was well received by those in the room. After all of the teams picked their five players, Bell made a motion to have each club pick an additional four players. His idea was approved unanimously and the draft continued.

In examining the meeting minutes from that day, I can't really estimate how long it took to complete the NFL's first draft. But, I can tell you that there was no podium, there was no clock, there weren't hordes of media and there definitely wasn't a fan around to cheer or jeer. I can further tell you that after the ending of the drafting process, the owners turned their attention to a number of other matters before adjourning for the day. My best guess is that the entire nine rounds were completed in less than two hours.

Newspaper accounts reported that the draft process was approved but did not learn just who was picked by which team until a later date. Carr explained to reporters that the draft was adopted to stop the "promiscuous scrambling" that occurred for star college players each year. 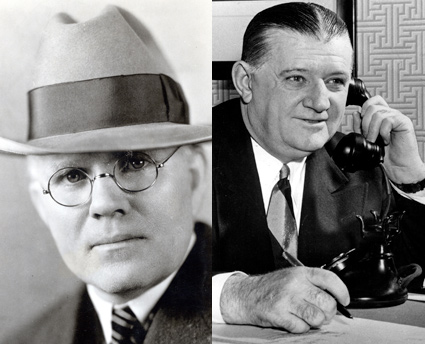 I'm sure that Carr (above, left) or Bell (above, right) could never have imagined that 76 years later the draft would include a red carpet entrance into a grand theater all to satiate the demand of millions of fans across the country.

Before you enjoy tonight's first round, here's a "potpourri" of what I consider some of the more interesting notes about past drafts. 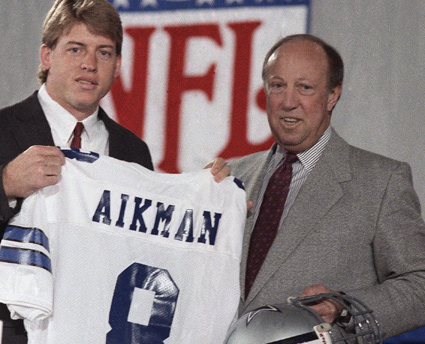 • Stories surfaced quickly about the NFL's top pick in its inaugural draft. Jay Berwanger holds the distinction of being the first player ever drafted. Selected by the Philadelphia Eagles, his rights were soon traded to the Bears. Rumors surfaced that he was demanding an astonishing $1,000 a game. I think it's safe to say that the Carolina Panthers would gladly agree to those terms on the spot tonight with whomever they select first overall.

• The Pro Football Hall of Fame's Class of 2004 is the only class of enshrinees that included only first-round draft picks. Bob Brown and Carl Eller went 2nd and 6th overall in 1964, John Elway was the first overall pick in 1983, and Barry Sanders was drafted by the Detroit Lions third overall in 1989.

• We know we're getting older when players drafted in the 1990s have completed their careers and are now getting enshrined in the Pro Football Hall of Fame. Marshall Faulk is the most recent draftee to find his way to Canton. He was taken 2nd overall in 1994.

• The Washington Redskins strategy under George Allen was labeled "the future is now." As a result, the team never hung onto to a single first-round draft pick in the 1970s. Amazingly, the team didn't make its first selection before the fourth round from 1972 to 1979.

• Thirteen players selected first overall have had Hall of Fame careers. The last to do so was quarterback Troy Aikman who was picked by the Dallas Cowboys in 1989.

• Only eight Heisman Trophy winners had NFL careers that earned them a bronze bust in Canton. The last Heisman winner to be elected to the Hall of Fame was Barry Sanders who was the top college player in 1988 and then enshrined into the Hall of Fame in 2004.

• Perhaps the best single first round by any team in the past 75 years has to belong to the Bears. In 1965, they drafted Gale Sayers and Dick Butkus with the 3rd and 4th picks of the first round.

• If we had the scrutiny we do today of how teams draft, could you imagine what the "talking heads" would be saying about the '37 Draft. Philadelphia, Brooklyn, Chicago Cardinals, New York Giants, and Pittsburgh all picked ahead of the Redskins that year. Yet, at number six, the Redskins landed TCU quarterback "Slingin'" Sammy Baugh who almost single-handedly revolutionized the NFL with his extraordinary passing.

• Rich Eisen and Chris Berman would have had a field day broadcasting the 1950 NFL Draft in the heyday of nicknames in sports. Here's a sampling of some of the names of players taken that year: Curly, Muscles, Snakey, Tank, Dopey, and Choo Choo.

• It took me one week into the 1995 NFL season before I added running back Terrell Davis to my fantasy team. The Denver Broncos obviously scouted better than me as they drafted him in the 6th round as the 196th player in that year's draft.

• Actor Ed Marinaro of "Hill Street Blues" fame was drafted in the second round of the 1972 Draft by the Minnesota Vikings. He ended up playing six seasons in the league with the Vikings, Jets, and Seahawks.

• I love reflecting on what would have been had trades not taken place. Tony Dorsett winded up in Dallas after the Cowboys obtained the second pick of the '77 draft from Seattle. Would Tony have made it to Canton had he been a Seahawk?

• How about all of the legends drafted by two teams during the "war" years of the AFL and NFL. Would we be referring to Paul Warfield and Carl Eller as Hall of Famers had they chosen to play for the Bills? I know for sure that Denver wouldn't have had to wait so long for a winner if anyone of these future Hall of Famers had joined the team rather than picking the NFL teams that also drafted them: Dick Butkus, Bob Hayes, Bob Brown, Paul Krause, and Merlin Olsen.

• Heisman Trophy winner Doug Flutie was passed over by most teams in 1985. He finally was picked in the 11th round by the Los Angeles Rams.

• Who says that offensive linemen never get respect? Seven tackles were drafted in the first round in 2008 including Jake Long who went first overall to Miami.

I could keep this blog going all day but I have to finish some other work before heading home and perching myself on the couch to watch with anticipation as Commissioner Goodell get things going with these simple words, "With the first pick of the 2011 NFL Draft, the Carolina Panthers select….."