Story not muddied in Jack’s mind

The public is going to get a chance to see the “new” Hall of Fame on June 1 when we hold our grand opening ribbon cutting that morning. Hall of Fame QB Joe Namath will be on hand for the ceremonial opening of the completed “Future 50” Expansion & Renovation Project that has grown the Hall of Fame from 85,000 square feet to 118,000 square feet. Included was more than 35,000 square feet of renovated space as well.

What the public won’t see is what Namath’s fellow Hall of Famer Jack Youngblood got a glimpse of late last month. The former Los Angeles Rams defensive end came to the Hall of Fame to speak to a private group holding a business meeting in the Hall’s new Event Center.

Youngblood was strolling through some of the behind the scenes of the Hall of Fame. Adorning many walls throughout office spaces are giant murals featuring some of the great photography found in the Hall of Fame’s collection of more than three million images.

One in particular caught Jack’s eye in the office area of the Ralph Wilson, Jr. Pro Football Research and Preservation Center: 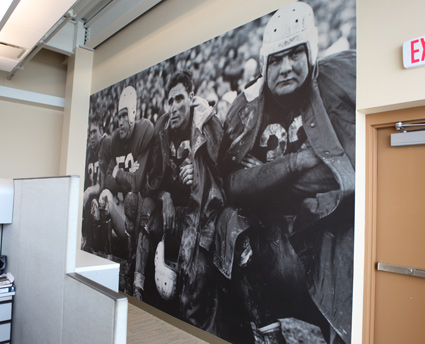 He shared that he truly loved how the Hall of Fame had decorated by using some of the historic images. The huge blowups brought the photos to life in his mind. The shot above was of Hall of Famer Charley Trippi and his Chicago Cardinals teammates slathered in mud during a game in the late 1940s. The photo conjured up memories for Jack of one particular game from his career.

It came in the 1977 playoffs when the Rams hosted the Minnesota Vikings at the L.A. Coliseum. Although the Vikings won the game, Jack won’t soon forget it.

The game was preceded by several days of heavy rain after a storm blew in off of the Pacific Ocean. The field turned into a quagmire as the inches of rainfall mixed with manure and grass seed that had been laid to patch the turf.

“There were times when you were on the bottom of the pile that you thought you’d drown and that’s no exaggeration!” Jack declared.

He then told us how one of his favorite pictures from his playing days was a bench scene from that game where he and teammate Larry Brooks were sitting side-by-side and just covered head to toe in mud so much so that the uniforms were undistinguishable.

Jack went on to describe how the uniforms were so stained and stunk so badly that the Rams equipment guy wheeled his laundry cart through the locker room and gathered the soiled jerseys and pants and deposited them directly into the dumpster!

As the adage goes, “every picture tells a story” and in some cases stirs memories of other stories.

If you want to see some footage to complement Jack’s story, check out this video of the game on YouTube.