Bump and run, or just boxing out? K.C. Jones left impact on NFL

Legendary Boston Celtics guard K.C. Jones was inducted into the Naismith Memorial Basketball Hall of Fame in 1989. That honor may never have occurred as he almost chose a much different career path. Jones had been drafted by the Los Angeles Rams general manager and future National Football League Commissioner Pete Rozelle in the 30th round of the 1955 NFL Draft and by the Celtics’ Head Coach Red Auerbach in 1956.

L.A. took a gamble on him basing their evaluation solely on his elite athletic ability. Following two years in the Army, Jones tried out for the Rams in 1958, because he didn’t believe he was good enough to play in the NBA. In the process, Jones may have very well changed the way football teams defend the passing game.

An All-American basketball star from the University of San Francisco, Jones was a multi-sport athlete who didn’t care what he was playing, he just loved the competition. He had been an all-city football player in high school and played two years of Army football before heading to college at USF. Seen as a long shot to even tryout with the team, it was an even a slimmer chance that he would actually make the 35-man Rams’ roster. 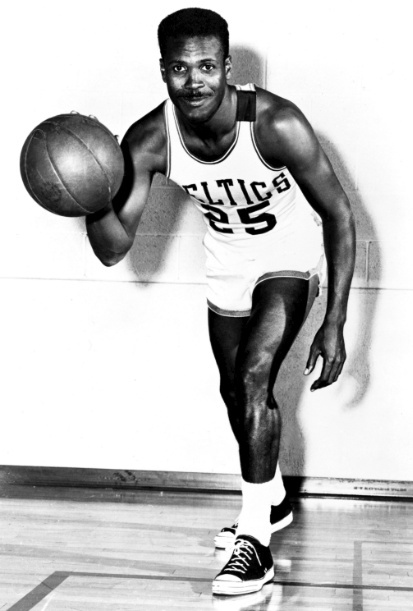 During the Rams’ training camp, Jones began to turn heads and made a determined bid for a job as a defensive back. The Rams defensive back coach Jack Faulkner thought Jones could have been a great defender and once said, “He had great size (6-foot-1, 200 pounds), quickness, toughness and intelligence.”

In a one-on-one drill during practice, Jones used a technique that gave the L.A. receivers fits. He lined up in front of them with no cushion between the receiver and himself. At the snap he hand-checked them off the line and did so again while running with them stride for stride. Jones was defending with the same tenacity as he did on hardwood. He maintained contact with the receivers throughout their routes, which caused them to complain this technique was against the rules.

Faulkner decided to check it out. “I went through the rule book,” he said, “and I’ll be damned if I could find anything that said it was illegal.”

As preseason opened, Jones saw some spot action against Washington and actually intercepted a pass. Two weeks later he started against the New York Giants. However, before the preseason ended and final cuts had to be made, Jones decided to give up football and return to the basketball court.

“I had an injury that would have gotten worse if I had continued to play football.” Jones said, “I called Red Auerbach and asked if there was still a spot for me on the team. Had Red said no, I would have gone back to the Rams.”

The Celtics already had waited two years for his services and were eager to get him back on the court. It proved to be a wise decision. Jones embarked on a Hall of Fame career defined mostly by his reputation as a defensive specialist, winning eight NBA titles as a player, two as an assistant coach and two as a head coach.

Jones may not have stuck in professional football, but his technique helped revolutionize the game. Two years after Jones’ tryout with the Rams, Faulkner was hired as defensive coach of the Los Angeles Chargers in the upstart American Football League where he made the “bump and run” technique famous.

“That’s where I learned it,” Faulkner stated. “I was so impressed I took it with me when I went to the AFL.”