Separately, Bill Belichick and Tom Brady have each built a legacy that rivals the greatest of all time at their respective roles. Together, they have created something that very few head coach and quarterback duos can even come close to matching. During their 19 years together the two have recorded a record 197 regular-season wins. A quick trivia question. Who did they pass in 2011 to reign supreme as the all-time winningest head coach and quarterback combination in pro football history?

Well ... that would be Hall of Famers Don Shula and Dan Marino of the Miami Dolphins, who totaled 116 career regular season victories as a head coach-quarterback combination. 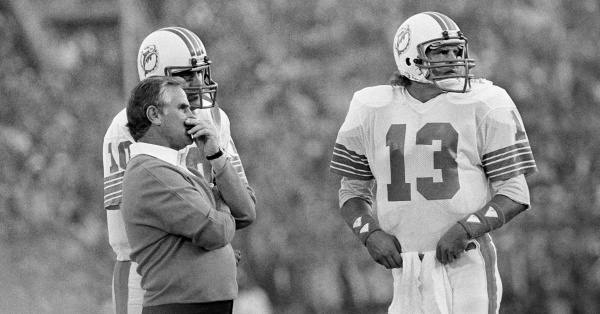 Do you remember when Coach Shula and his quarterback, “Cover Boy” as Marino was affectionately known by his teammates early in his career, recorded their first victory together as a head coach-starting quarterback duo?

Miami, fresh off a Super Bowl XVII appearance, selected Marino with the 27th pick overall in the famous 1983 NFL Draft. Without an immediate need at the quarterback position, the Dolphins hoped for Marino to learn on the sideline while he watched the incumbent QB David Woodley run Shula’s offense. It wasn’t long, however, before Marino earned the starting position. After he relieved Woodley twice during the first five weeks of the season, Shula thought the time was right for a change and handed the keys to the franchise over to Marino. The Dolphins found out almost instantly they had found their quarterback for years to come.

Marino started his first NFL game on Oct. 9, 1983 against the division rival Buffalo Bills at the Orange Bowl in Miami. The rookie passer handled himself extremely well as he completed 19 of 29 passes for 322 yards and three touchdowns. His final TD pass, a 14-yarder to receiver Mark Clayton with a little more than three minutes remaining in the fourth quarter, gave Miami a 35-28 lead and what seemed to be their first victory together.

Buffalo, however, found a way to tie the game at 35s on a 1-yard TD pass from Joe Ferguson to running back Joe Cribbs on fourth-and-goal with 23 seconds left to force overtime. Marino led the Dolphins into position to win twice during the OT, but two missed field goals by kicker Uwe Von Schamann (52, 43 yards) sealed their fate. Finally, it was Bills’ kicker Joe Danelo who connected on a 36-yard field goal to give Buffalo a 38-35 comeback victory and spoil Marino’s debut.

One week later, on Oct. 16, 1983, Marino and the Dolphins made the trek up the East Coast to play another division rival, the New York Jets at Shea Stadium. Once again, “Cover Boy” showed why he was the face of the Dolphins franchise when he put together another impressive showing with a second consecutive three-TD pass performance. Marino also completed 17 passes for 225 yards. And this time, Shula made sure the rest of the team didn’t let the young quarterback down as Miami routed the Jets 32-14. The win was Marino’s first as a Dolphin and set the franchise up for years of success. Only once during his 17 seasons as Miami’s quarterback did the Dolphins finish the season with a losing record.